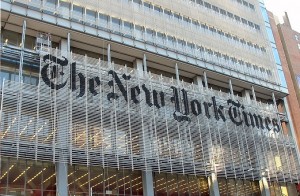 A fascinating journalistic inside baseball story is developing around Republican presidential candidate Mitt Romney‘s ill-fated decision to launch a lying attack on President Obama in the midst of violence in Libya and Egypt. Josh Marshall of TPM flagged a New York Times piece on the Romney campaign’s machinations that was published online Tuesday, then altered drastically with no explanation. The Times is scrambling to explain it now, but there are some disturbing clues that make their version of events a tough sale, and point to input from the Romney campaign.

The original piece (reprinted by Josh Marshall at TPM), entitled “Behind Romney’s Decision to Attack Obama on Libya,” focused on the inner workings of the Romney campaign’s decision to exploit the tragedy in Libya for political gain, while ignoring or minimizing the lies their attack was based on. In the opening paragraph, they even parroted Romney’s assertion that a statement by an embassy communications officer was actually put out by “administration officials in Cairo.”

Then, the paper replaced the piece (using the same URL) with a drastically different one that contained some additional reporting, but also some key omissions and alterations, with no explanation or acknowledgement of the change. The new piece, entitled “A Challenger’s Criticism Is Furiously Returned,” was more of a see-saw account of Romney’s attack, President Obama’s response, and reactions from others.

Aside from the drastically different editorial tone, the new piece contained added detail about the crafting of the Romney statement Tuesday night, and new quotes from elected Republicans, and a Republican communications strategist named John Ullyot, who is not connected to the Romney campaign. Gone, however, was a damning quote from an unnamed Romney campaign adviser, and part of another quote from an adviser who was not named in the original piece, but was identified as a “senior strategist” in the next version, then was altered again to attribute the quote to Romney policy director Lahnee Chen.

Politico‘s Dylan Byers got this explanation from The Times Thursday morning:

“As reporting went on during the day yesterday, we were able to flesh out the story, add more context and get more sources on the record, which is obviously what we prefer. Having said that, we stand by the reporting in all versions of the story,” New York Times spokesperson Eileen Murphy told POLITICO.

Asked how removing a quote from a story provided more context, Murphy said, “We removed a few quotes from sources that were unnamed and added in sources who were on the record, and most important, we stand by all of the reporting in all versions of the story.”

Peter Baker, one of the reporters bylined on both versions, also told The Huffington Post‘s Ryan Grim and Mike Calderone that some of the changes were due to a desire to use less blind quotes. “As we reported more through the day, we found Republicans criticizing Gov Romney on the record, so why use an anonymous one?” Baker said. Byers points out the painfully obvious answer to that question: “Because there’s a big difference between ‘Republicans’ and a Mitt Romney campaign adviser.”

As Marshall notes, there’s also the lack of transparency involved. The current version of the story contains no indication that it was ever changed, let alone what those changes were, or why they were made. Print and online publications use a variety of standards to deal with such revisions (from a simple “This story has been updated since publication,” to a more detailed accounting of the changes), but it’s very unusual to completely ignore such significant changes. That, more than anything, is what makes this a story.

The Times‘ explanations are fine when it comes to what was added, and even to the shift in the theme of the piece, but the premise is that those additions rendered the omitted portions redundant. A comparison of the to stories demonstrates that this is not the case, and while it’s impossible to know what really went on, this smacks of input from the Romney campaign.

By itself, this isn’t sinister. Sources often have second thoughts after a story is published, and/or feel the reporter has misquoted them, or used a too-narrow attribution, or quoted something they intended to be off the record. Such claims by sources are not to be taken at face value, and are often just a ruse to get around their own buyer’s remorse, but sometimes a reporter will make an effort to accommodate a source, if possible. They’ll tighten up a quote, or change the attribution to better protect a source’s identity, and if a source really insists that a quote be remove because it was supposed to be off the record, the reporter has to decide how valuable that quote is, or whether the source can offer something of greater news value in exchange.

Something like that seems to have occurred here. For example, the original piece contained this quote:

“We’ve had this consistent critique and narrative on Obama’s foreign policy, and we felt this was a situation that met our critique, that Obama really has been pretty weak in a number of ways on foreign policy, especially if you look at his dealings with the Arab Spring and its aftermath,” one of Mr. Romney’s senior advisers said on Wednesday. “I think the reality is that while there may be a difference of opinion regarding issues of timing, I think everyone stands behind the critique of the administration, which we believe has conducted its foreign policy in a feckless manner.”

The current version features a shortened version, now attributed to a named source:

“While there may be differences of opinion regarding issues of timing,” Mr. (Lahnee) Chen said, “I think everyone stands behind the critique of the administration, which we believe has conducted its foreign policy in a feckless manner.”

The reporters here can argue that the shorter quote is just more concise, or needed to be condensed to accommodate the additional reporting, but there is not a reporter in the world who would have initially chosen not to identify a source just for fun. the fact that Chen is identified in the later version is a strong indication that the source agreed to the revised attribution, perhaps in conjunction with other changes, like a shorter quote that softens the calculation and opportunism of the Romney campaign.

Or like the excision of a quote from a campaign adviser who spoke too candidly, and was perhaps too easy to identify:

And as an adviser to the campaign who worked in the George W. Bush administration said on Wednesday, Mr. Romney’s accusation that Mr. Obama had invited the attacks because he had weakened America looked like “he had forgotten the first rule in a crisis: don’t start talking before you understand what’s happening.”

That’s an extremely newsworthy quote coming from a Romney campaign adviser, yet it doesn’t appear anywhere in the new version. Nothing Baker or The Times have said explains why a reporter would drop such a valuable quote.

What does appear, though, is some added detail that could only have come from the campaign. The original story described how Romney’s Tuesday night statement was “a team effort, his aides said, written by a group of aides who focus on policy, another that focuses on political strategy and another on communications. Mr. Romney himself signed off on it, they said.”

The new version, however, gives a lot more detail:

While Mr. Romney was on a four-hour flight from Reno, Nev., to Jacksonville, Fla., his senior staff — a mix of the policy shop, the communications team, and the strategy operation — crafted a statement on a conference call. Among those participating were Lanhee Chen, the policy director; Richard Williamson, a foreign policy adviser; and Stuart Stevens, the campaign strategist.

As soon as Mr. Romney landed, he was updated on breaking developments. He personally read and approved his campaign’s statement before it was sent out at 10:10 p.m. Tuesday.

It’s important to note that such negotiations with sources (if they occurred in this case) are not unusual, or even necessarily bad, and since they are always done off the record, this would explain why The Times‘ explanation has been lacking. What’s unusual is that the reader normally can’t see the fingerprints of such wrangling, either because it’s done prior to publication, or with sufficient transparency to avoid raising a red flag.

Neither the Romney campaign nor Peter Baker have responded to requests for comment, but they wouldn’t be able to comment on off-the-record negotiations anyway, unless both parties agreed to waive the privilege. The New York Times‘ readership, however, deserves to see both pieces, and decide if there was a trade-off, and if they benefited from it.

Update: Shortly after publication of this story, Peter Baker responded to my earlier email. I’ve waited a reasonable interval before publishing our exchange, in order to give baker the opportunity to complete it. If he responds further, I’ll update the story, but here is our conversation so far:

12:43 pm From Tommy Christopher: Peter, I looked at both versions of that Romney story, and I saw what you told HuffPo, but the two quotes that were altered/omitted look like the result of negotiations with sources. The Lahnee Chen quote was initially longer and attributed to an unnamed adviser, and the omitted quote, “he had forgotten the first rule in a crisis: don’t start talking before you understand what’s happening,” is extremely newsworthy coming from a campaign adviser, and has no equivalent in the new piece. The attribution was also fairly narrow, narrow enough to spook a source who wished to remain anonymous. Can you comment?

2:44 pm From Peter Baker: Hi there. Thanks for asking. That’s an interesting theory but honestly not at all true. This really isn’t complicated: I had multiple feeds from lots of reporters, including the one that David and Ashley wrote for the web. I used Republicans criticizing Gov. Romney on the record rather than a Republican criticizing him anonymously. I try really hard to avoid anonymous quotes because they just don’t have as much credibility with the reader and more often than not they’re unnecessary. Washington has become way too accustomed to doing business behind the cloak of anonymity and we ought not to contribute to that where we can avoid it. That particular quote added nothing to the story that it didn’t already have and certainly nothing to justify anonymity. It’s really that simple. All of this armchair journalism is pretty funny — most of the time we’re trying to explain why we sometimes do use anonymous quotes, not why we don’t.

2:58 pm From Tommy Christopher: Thanks for the response. The quote you took out, though, wasn’t just an anonymous shot, it was a tightly attributed quote from a current Romney campaign adviser that was more than just criticism, it was news. I’m happy to add your response, but nothing that appeared in the later version comes close to equaling that quote, and what about the attribution on the Lahnee Chen quote? Why would you leave it out of the original, then add it in later, unless Chen pr the campaign said you could?

3:14 pm From Peter Baker: With all respect, I disagree. It was a fine quote, but would have been better if it were on the record.

3:19 pm From Tommy Christopher: We’ll agree to disagree, then. And the Lahnee Chen attribution? It went from “senior adviser” to “senior strategist who asked not to be named” to “Lahnee Chen.”

3:21 pm From Tommy Christopher: And why was it shortened?

4:46 pm From Peter Baker: The web has endless space but the print paper doesn’t. We edit for space all the time, and here we had a lot of material to get in without duplicating points already made. This is pretty normal journalism here.