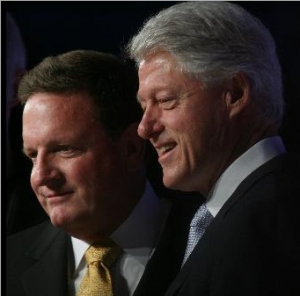 Wow — whoda thunk. Once up on a time, Ron Burkle and Bill Clinton were thick as thieves, BFFs schmoozing up a lucrative storm for Burkle’s Yucaipa and (allegedly) flying though the sky on Burkle’s private jet with pretty young things. Now they are buds no more, relationship severed and reputations distanced and chummy lovefests replaced by snippy articles wherein the playboy billionaire disses his former best bud for being a waste of his precious time.

Business Week has a very friendly profile of Burkle — his first in three years, they claimed, though LA Weekly begs to differ — in which Burkle, who is currently making a play for Barney’s and Barnes & Noble, disses the former president and makes it clear that the breakup was not just one-sided. You know, because Hillary was running for President and Burkle was a well-known womanizer and model hound and the two of them together caused rumors and nicknames for the Burkle jet like “Air Fuck One.” I know. Burkle totally had to end it.

BusinessWeek calls the relationship “meaningful and transactional.” Here’s how so: (1) Burkle’s donated $1.86 million to the Democratic Party since 1992; (2) Clinton “brought Burkle into circles of government and celebrity he would never have been able to crack on his own”; (3) “For five years after Clinton left office, he was an adviser to Yucaipa, earning at least $15 million for making phone calls, brokering introductions, and giving speeches on Yucaipa’s behalf.”

On balance, that sounds like a pretty damn good deal for them both: cold hard cash for Clinton, and global access and clout for Burkle. So why is Burkle sulking?

According to him, it’s because Clinton brought him trouble — like, people noticing when Burkle did shady things. Here’s what he told Business Week, who frames it oh-so-delicately:

Each brought the other a fair amount of trouble. “When Clinton left the Presidency he had to make money, and there were certain limits on how he could do it,” says Burkle. “In that regard, having him work for Yucaipa was the right thing to do. In other ways, it was the dumbest thing I ever did.”

Clinton’s post-Presidential business and social life received intense scrutiny, and Burkle—the divorced billionaire with a Boeing (BA) 757—became an object of curiosity and often scorn. “If someone wanted to embarrass [Clinton], I got thrown in it, too,” says Burkle. “I got all that for free.” Burkle also received a lot of attention when he unsuccessfully sued Michael Ovitz over a failed partnership and when he claimed he was the victim of an extortion attempt by a New York gossip reporter.

Poor blameless baby! Surely these meanies paying attention to him because of Clinton should not have noticed anything sketchy he was involved in. Never mind the girls, though Lord knows that burned up the gossip pages. There was other sketchy stuff:

When Hillary Clinton was nominated as Secretary of State in 2008, Bill severed his ties with Yucaipa and Burkle. Some of Yucaipa’s business dealings were getting messy. It hired as a consultant the now jailed Italian developer Raffaello Follieri and took on Sheikh Mohammed bin Rashid Al Maktoum, the ruler of Dubai, as a partner. Burkle says he and Clinton don’t see much of each other anymore and explains the rupture this way: “Before, every trip with him seemed like a once in a lifetime opportunity. Now I have so many things to do.”

Sheesh. Who exactly is Burkle trying to kid? Fine, hanging with the Big Dog is going to get you attention (the kind of attention you pay $15 million over 5 years for, apparently). But let’s not blame him for the fact that there was stuff to find. And actually, by all accounts Clinton is a demanding travel buddy (as David Remick illustrated in his mammoth Clinton profile a few years back) — but still. You have so many things to do? Really? Come on.

There may be (and almost certainly are) secret underlying reasons for the split that go beyond what’s out there, but it’s not rocket science why Clinton had to distance from Burkle — and the bad press the two got together. As Nick Denton put it on Gawker two years ago: “With Hillary Clinton in a battle for the Democratic nomination, her husband does not need a billionaire modelizer as a friend.” Indeed: note that in the VF article, the “Air Fuck One” reference came in the fourth paragraph, followed by a former Clinton aide calling him “radioactive.” BusinessWeek may have been credulous here, but the rest of us know better.