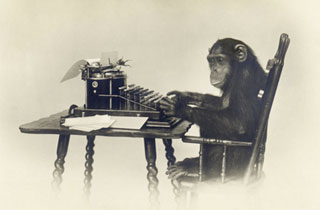 The Rupert Murdoch-owned paper hasn’t used typewriters in nearly three decades, but decided one day to mount a speaker tower in the newsroom to play nothing but typewriter clicks and clacks, in order “to increase energy levels and help reporters to hit deadlines.” As The Independent describes the the soothing music: “The audio begins with the gentle patter of a single typewriter and slowly builds to a crescendo, with the keys of ranks of machines hammering down as the paper’s print edition is due to go to press.”

Their logic: newspaper noises will inspire people to work faster and with more intensity. “People feel to some extent disengaged from the thrill of producing a newspaper, which is galvanising,” Michael Williams, a professor who worked for The Times back in 1973, told The Independent.

So what say you, Times employee Jules Mattsson? Is a typewriter in your ear better or worse than being forced to listen to Limp Bizkit on repeat?

@johnnypaige @SophieWarnes no I love it greatly, especially with it being so close to my desk pic.twitter.com/JPCngd90xh

It remains unclear if The Times plans on piping in clouds of cigarette smoke and re-institutionalizing workplace sexism to increase productivity.