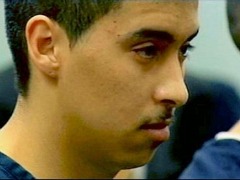 On Sunday, California governor Arnold Schwarzenegger rang in the New Year – and, in essence, closed out his term – by reducing the manslaughter sentence of one Esteban Nuñez, son of former Assembly Speaker Fabian Nuñez. Schwarzenegger reduced 21-year-old Nuñez’s sentence from 16 to seven years. The decision has some law professors and other political experts (armchair political strategists included) wondering what role Nuñez the Younger’s political ties might have had to do with his commutation. Nuñez’s father now works as a political consultant along with Adam Mendelsohn, the Governor’s Schwarzenegger’s former communications director. Previously, he had worked closely with Governor Schwarzenegger to push legislation aimed at reducing greenhouse gas emissions.

In October of 2008, 24-year-old Ryan Jett, a friend of Nuñez’s, stabbed 22-year-old Luis Dos Santos to death after the young men became embroiled in an argument near San Diego State University. Nuñez stabbed another young man – a friend of Dos Santos’ – who survived the attack. Nuñez and Jett both pleaded guilty to voluntary manslaughter and received sentences of equal length. Schwarzenegger’s commutation, The Sacramento Bee reports, has now deemed Nuñez’s original sentence “excessive.” Wrote the Governor:

I do not discount the gravity of the offense,” the governor’s statement said. “But given Nuñez’s limited role in Santos’ death, and considering that … Nuñez had no criminal record prior to this offense, I believe Nuñez’s sentence is excessive.”

Dos Santos’ family is less than thrilled, to put it quite mildly, with the Governor’s decision, accusing him of waiting until the end of his term to reduce Nuñez’s sentence so that he would be less likely to deal with the consequences and any resulting backlash. The Dos Santos family is also pointing to other big names who voiced their support in favor of reducing Nuñez’s sentence, including Los Angeles Mayor Antonio Villaraigosa.

The San Jose Mercury News brought the issue before various law professors, some of whom agreed that, Nuñez’s connections aside, the Governor’s decision to trim the young man’s sentence is valid. One noted that “disparity of sentence when you’ve got a divergence of responsibility is an entirely reasonable basis for a commutation of this sort.”

Of course, that doesn’t mean that Nuñez’s father – and his powerful friends – didn’t play some sort of role in Schwarzenegger taking a look at Nuñez’s case in the first place. According to another professor “it’s clearly a political act,” given the facts surrounding Nuñez’s sentence didn’t “boggle the mind” in terms of its perceived injustice.

Nuñez’s was one of ten commutations made by Schwarzenegger throughout his term.