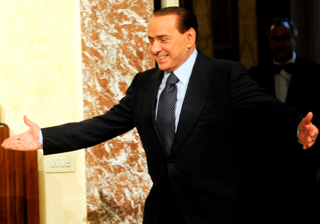 Turns out America isn’t the only place where leftists can find themselves accused of being “dirty hippies.” Italy’s Dirty-Old-Man-in-Chief, Silvio Berlusconi, is lashing out against his opponents’ hygiene problems in response to his legal woes involving underaged prostitutes and questionable political practices. The result is a political dialogue that makes Donald Trump hair jokes sound as mature as a new Congressional budget plan.

Berlusconi, who has developed a reputation for immaculate hygiene from those who have testified that he ordered those participating in his “Bunga Bunga” parties to shower before and after sexytime, lashed out against the left-wing Democratic Party at a rally yesterday, claiming that showers are so rare on that side of the political spectrum that it shocks those politicians when they see their chins through their facial hair. From the UK Telegraph:

During a final rally in the southern Italian city of Crotone, Berlusconi said: “The leaders of the Left don’t wash themselves much. When they go into the bathroom, and they don’t go often since they don’t wash much, they look in the mirror when they shave and surprise themselves.”

Mr Berlusconi has a reputation for disliking beards, seeing them as sign of left leaning political sympathies. His obsession with hygiene has also emerged from intercepts of his infamous “bunga bunga” parties.

Needless to say, those on the left immediately retaliated– by claiming not that they do shower, but that their natural body chemistry allows them to abstain from washing themselves more often. “If we don’t wash much,” commented Democratic Party leader Pierluigi Bersani, “it’s because we are clean.” Another Democrat, Piero Fassino, took the high road: “None of us has ever made fun of Berlusconi’s high heels or toupee.” Except Fassino just did, right now.

Perhaps something is lost in translation here, or the fact that Berlusconi is in his mid-70s and in the middle of a confusing legal battle in the notoriously disorganized Italian judicial system is really getting to him. But this isn’t the first time Berlusconi makes an outrageously offensive comment to defend his behavior, and his strategy will be tested on Monday in Italy’s parliamentary elections. He is said to be in his weakest position since assuming the nation’s highest office, possibly due to the country’s campaign issues being “do our politicians shower enough?” and “how young is too young?”