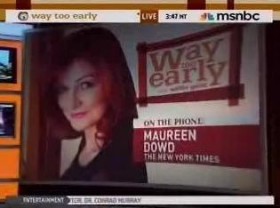 “I love Sarah Palin. I mean, I love her more than anyone because as a journalist she is the best story ever… It’s like Hollywood casting — when you have Meg Ryan playing a nuclear physicist or, you know, Calista Flockhart playing a Harvard lawyer — I mean, you’ve got this former beauty queen and sportscaster who is in the role of Dick Cheney, and it’s mesmerizing.”

— Maureen Dowd on Way Too Early With Willie Geist, showing her typical confidence in the abilities of women

Geist had Dowd call in to the show as his “Wake Up Call” to discuss her column in today’s New York Times comparing Sarah Palin to — who else? — Hillary Clinton. Here’s the crux:

In their vivid twin performances Sunday — Hillary on “Meet the Press” in Washington and Sarah at her farewell picnic in Fairbanks — two of the most celebrated and polarizing women in American political history offered a fascinating contrast.

Hillary, who so often in the past came across as aggrieved, paranoid and press-loathing, was confident and comfortable in her role as top diplomat, discussing the world with mastery and shrugging off suggestions that she has been disappeared by her former rival, the president.

Sarah, who was once a blazingly confident media darling, came across as aggrieved, paranoid and press-loathing in her new role as bizarre babe-at-large, a Nixon with hair extensions ranting about “American apologetics,” which sounds like a cross between apologists and Dianetics.

Once you get past the five separate opening paragraphs (MoDo is always so reluctant to part with her bon mots, to the detriment of her overall work), it actually makes some astute observations. She notes that Hillary Clinton has “lost that irritating question mark she used to carry around above her head like a thunder cloud: What is Hillary owed because of what she gave up, and went through, for Bill?” and “In this White House, Barack Obama is the pretty thing who is taken with Hillary’s serious, smartest-girl-at-Wellesley aura.”

She’s also quite right that Palin’s looks factored into her appeal, and her controversy. But noting that a dash of sex appeal adds to the intrigue is different than how she constantly sets up women as either attractive or smart, but never both. (This, by the way, dovetails with what she said on the Colbert Report back in December 2006 – I’m paraphrasing, but it was something like “the beautiful women want to be told they’re smart and the smart women want to be told they’re beautiful.”) Alas, this formulation of women seems to be Dowd’s only option, no matter what. It limits her enormously as a political observer.

But! That doesn’t mean her evaluation of Palin as an eventual GOP candidate isn’t relevant to this piece. Dowd thinks that Palin could “absolutely” be the nominee: “She is the first person to fuse politics with reality TV – I think she could absolutely be the nominee, because she’s sort of playing to people’s darker impulses and that core of the Republican party that is left – that is very bitter – is loving her.”