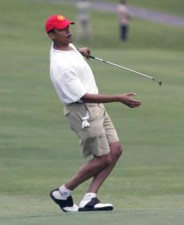 “And where Mr. Obama’s basketball game is showy and often televised, his golf is furtive and off-the-record. He plays with junior aides and discreet longtime friends. There’s no press allowed onto the course with him, no cameras — and few witnesses. A foursome of loyal staffers often plays out ahead of him, clearing the way and trying to ensure no one spies.”

— Now that the ‘President plays sexist golf’ meme has been so ably snatched up by the NYT, the WSJ is apparently attempting to turn President Obama’s fondness for golf into some sort of John Le Carre thriller. Is it possible the president just likes privacy and golf is more relaxing? Eee gads! Life in the White House is never that simple! Some more tidbits from the article below (mostly because it’s hard to resist a Mark Knoller mention when one presents itself).

On the campaign trail, Mr. Obama played a mean, frequent and public game of hoops. He played outdoors and in, with pols, pros, troops in Kuwait and university kids half his age. “For people our age, it was like watching Clinton on ‘The Arsenio Hall Show,’ playing the saxophone,” says Alex Podlogar, a 34-year-old sportswriter at the Sanford Herald in Sanford, N.C.

But as president, Mr. Obama has neglected the court. He has played only seven known games of basketball since taking office, compared with 25 rounds of golf, a sport he picked up about a decade ago when he was an Illinois state senator. That’s more golf than former President George W. Bush played in two terms, according to CBS White House correspondent Mark Knoller, who tracks presidential trivia. (In 2003, Mr. Bush quit golf, saying he did so out of respect for the troops serving in Iraq. Since leaving office, he has returned to the sport, an aide says.)