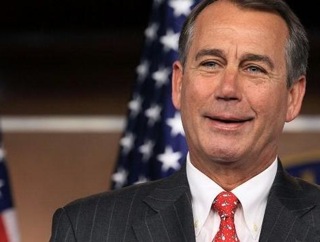 Speaker John Boehner is in charge of the least popular governmental body in America. It isn’t a particularly easy job, and in an interview with the Wall Street Journal published late yesterday, he tells Peggy Noonan what it’s like to be both “Dean of Students” and “Spouse,” to try to prevent scandals before they become scandals, and how the senior members of Congress are a much bigger problem than the Tea Party freshmen.

The interview is full of fascinating details of how Speaker Boehner sees himself, what Congress’s biggest problems are, and his hope for the legislative body to ever be popular among Americans (not high). On the political side, the most interesting confession he makes is that he likes the Tea Party freshmen just fine– it’s the older members of Congress that get on his nerves:

“With modern communications, a handful of them who feel differently will go out there and make their case on why we oughta go further, why we oughta do more. And there’ll be a couple of outside organizations who come along and gin it up, and then all of a sudden [some] members are getting heat, and you know they really want to be with us but they don’t want to put up with the heat at home. But it’s not the freshmen, that’s the amazing part of this.”

He notes that given the number of decades it has taken the grow the government to the size it is today, it is wholly unfeasible it can be torn down overnight.

He has some good words for President Obama personally, though still seems sore about last summer’s debt ceiling debate, claiming that he risked his Speakership to compromise with the President, and he simply refused. He also notes that he gets along well with House Majority Leader Eric Cantor, and their dust-ups usually happen at the staff level, not personally.

And then there are the scandals:

“People think I’ve got this job as a leader. They don’t realize that I have about 200 responsibilities and roles. I’ve gotta be the big brother, the father, I gotta be the disciplinarian, the dean of students, the principal, the spouse—you can’t believe all the roles that I have to play! But one of them is, you know, some problems you can nip early. I had three guys in here a few years ago, I said ‘Boys, you’re cruising down the wrong path.’ Two of them listened, one of them didn’t. He’s no longer here.”

It is a humanizing look at the role Speaker Boehner plays, and while the political bits– particularly the attack on more veteran members of Congress– will likely give Speaker Boehner the most trouble, the confirmation of what we all assume, that Congress’s problems are more human than robotically political, make the interview well worth a read.