Study: One In Eight Americans To Stop Paying For TV In The Next Year 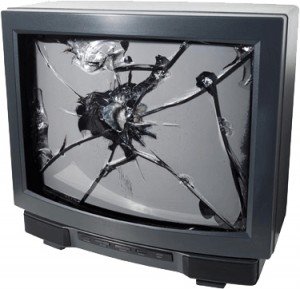 As the times keep a-changing, so must the technology of yesterday fall by the wayside. Cell phones have made landlines irrelevant. Twitter has replaced personal blogs that consist of more than two sentences. And the iPad has completely revolutionized the way we do…whatever it is the iPad does. Now though, the New York Post is reporting that the next big relic to fall is the very act of paying for TV.

The study found that one in eight Americans will be canceling their pay service in the next year. When asked why, most of them blamed the cost. That’s not hard to believe, what with times being tough and the average cable or satellite bills sitting at a steep $71 and rising on a consistent basis. But, even though the costs are exorbitant, Americans love television. Should we assume that this study is telling us that everyone is heading back outside to exercise? Or are we merely reverting to the golden days of radio and welcoming the likes of The Shadow or Little Orphan Annie into our homes? Of course not. The cable dissenters are just giving up one glowing screen and replacing it with another. Why pay to watch TV when you can watch it all for free on your computer completely legally (wink wink)?

“Jeremy Levinn, a 27-year-old personal trainer from Manhattan, jumped the ship last year. To feed his 30 Rock, Glee and The Office habit, he turns to network Web sites and Hulu.
He puts up with the usual day-after delay because ‘I’m not going to plan my schedule around watching TV, so it’s actually more convenient to be able to watch it [online] whenever I want.'”

As that quote makes clear, it’s not just the costs that are driving customers away from cable. The internet has shown us that we don’t need to be beholden to the schedules of the television networks. When Tivo and other DVR equipment first appeared, many in the industry worried that it would spell doom for advertising revenue as viewers gleefully fast forwarded through all the commercials during their favorite shows. Little did they know that giving viewers a taste of a television system that they control would drive them away from the boob tube entirely.

Americans now know that the technology exists for them to watch whatever they want whenever they want it, and that Pandora’s box isn’t going to get closed any time soon. Cable companies tried to react by adding On Demand services, but none of them compare to the relative ease that Hulu and other legal online options promise. And they certainly don’t provide the infinite choices that viewers who use illegal downloading sites get.

We all got a glimpse of the future a few months ago when HBO introduced HBO Go which was basically their version of Hulu. To maintain their status as a pay channel, the website is only viewable by those who are already HBO subscribers through cable or satellite. However, from the moment the site was announced, all everyone wanted to know was when we could drop the middle man and subscribe to HBO Go itself.

“HBO co-president Eric Kessler knows what side of the bread is buttered, and gives no indications he has an eye on the next course. “We benefit tremendously from our partnership with television providers,” he said. “We’re not interested in disaggregating the content.”

And why should they be? The market for online video distribution is infinitesimal compared with the pay-TV universe — today. But a smart business like HBO thinks long term, and built into any strategy has to be a hedge that keeps a toe dangling in new pools of consumption, even if puddle deep. HBO should think of the Internet less as a VIP wing for its paying customers and more as a zone for expanding their ranks beyond its impressive though plateauing subscriber base of approximately 30 million.”

If Cable companies want to survive in the television game, they need to adapt. To do that, they need to take the phrase “On Demand” to its logical end point: giving viewers complete access to exactly what they want to watch. The first step would be to allow subscribers to create their own packages. Back when the choices were merely cable or no cable, the wealth of channels was a good thing. However, as time goes on, the fact that cable companies make viewers pay for hundreds of channels they don’t want to get the few they do has become increasingly annoying. That’s why the idea of subscribing straight to HBO was so enticing to so many with a limited income but a desire for quality entertainment.

Next, and more importantly, they need to work with all the different channels to increase their internet presence. Viewers want the entire library of their favorite shows to be online, and cable companies need to get involved with making that happen if they want to remain relevant. If they give the channels the bandwidth to put everything on their specific sites and then allow viewers to subscribe to the sites of their choosing, only then will they be able to defeat the threat of internet piracy that is hurting every medium of entertainment.

The Reuters HBO article mentions some early plans Comcast had for buying part of Hulu (which is potentially going to switch to a paid subscription based service) and that shows that the cable companies know that they need to change and, if they didn’t before, this new study should give them the final push. If these companies don’t adapt, paying a middleman for television will be a thing of the past.

So, next time you’re stuck waiting six hours for the cable guy (or if they do what they did to the Mediaite office yesterday and just never show up…), feel free to comfort yourself in knowing that that industry may very well be going the way of print media.