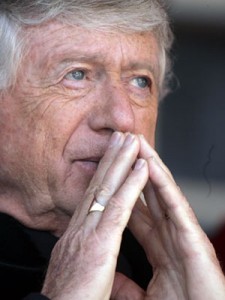 200,000 people may have gone to listen to Jon Stewart decry the domination of partisan and extreme opinions in our news media and political discourse but, at the end of the day (and, as he tried his best to explain last night with Rachel Maddow), he is still a comedian commenting from the outside. Ted Koppel is not. The 47 year veteran of journalism wrote an editorial for the Washington Post entitled “Olbermann, O’Reilly and the death of real news”, in which, as the title suggests, he doesn’t mince words describing his displeasure with the two biggest cable news outlets.

“The commercial success of both MSNBC and Fox News is a source of nonpartisan sadness for me. While I can appreciate the financial logic of drowning television viewers in a flood of opinions designed to confirm their own biases, the trend is not good for the republic. It is, though, the natural outcome of a growing sense of national entitlement. Daniel Patrick Moynihan’s oft-quoted observation that ‘everyone is entitled to his own opinion, but not his own facts,’ seems almost quaint in an environment that flaunts opinions as though they were facts.

And so, among the many benefits we have come to believe the founding fathers intended for us, the latest is news we can choose. Beginning, perhaps, from the reasonable perspective that absolute objectivity is unattainable, Fox News and MSNBC no longer even attempt it. They show us the world not as it is, but as partisans (and loyal viewers) at either end of the political spectrum would like it to be. This is to journalism what Bernie Madoff was to investment: He told his customers what they wanted to hear, and by the time they learned the truth, their money was gone.”

Koppel goes on to compare partisan, choir-preaching news to clothing brands that put faulty sizes on their clothes to flatter their customers. Why shop on the other side of the mall when this store makes me feel so much lighter?

But, despite the attention-grabbing headline, Koppel doesn’t really view either Fox News or MSNBC as journalism’s cause of death. More like the final symptoms of a terminal disease contracted decades ago. He points to the creation of 60 Minutes as the beginning of the descent. Not the show itself, but its success as it was the first time news programs were viewed “as profit centers, with all the expectations that entailed.” This led to the dissolution of the networks’ expensive foreign bureaus.

“Peter [Jennings] called me one afternoon in the mid-’90s to ask whether we at ‘Nightline’ had been receiving the same inquiries that he and his producers were getting at ‘World News Tonight.’ We had, indeed, been getting calls from company bean-counters wanting to know how many times our program had used a given overseas bureau in the preceding year. This data in hand, the accountants constructed the simplest of equations: Divide the cost of running a bureau by the number of television segments it produced. The cost, inevitably, was deemed too high to justify leaving the bureau as it was. Trims led to cuts and, in most cases, to elimination.

The networks say they still maintain bureaus around the world, but whereas in the 1960s I was one of 20 to 30 correspondents working out of fully staffed offices in more than a dozen major capitals, for the most part, a “bureau” now is just a local fixer who speaks English and can facilitate the work of a visiting producer or a correspondent in from London.”

This is a much more depressing view of affairs. If Fox and MSNBC were really to blame, then there would be a chance, however unlikely, to bring hard journalism back from the brink.

Of course, some will say that Koppel is taking an overly rosy view of the past. While he laments a present where the millions of news outlets on cable and the internet have splintered an audience and given them no reason to seek out facts that conflict with their opinions, one could argue that that splintering helps keep any one news outlet from getting too powerful which would make any ethics violations all the more damaging. You need only look a few decades before the seeming golden era Koppel writes of to see William Randolph Hearst using his monopoly to make sure only stories that helped he or his friends got printed.

However, whether you agree with Koppel or not, it’s a fascinating read from someone who certainly deserves to be listened to. Read the rest of it here.