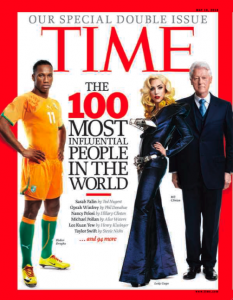 It’s the moment I know you’ve all be waiting for: this year’s Time 100: The Most Influential People In the World (or at least people that stand a good chance of getting more magazines off the stands) has been released. Presumably there is a big splashy party to follow. Truth be told, one of the fun features of the Time 100 list is the magazine’s match-making skills when it comes to finding bold-faced names to pen the blurbs that accompany the some of the featured nominees (alas, readers are not allowed to vote on these pairings or we might get something really good like ‘Rachel Maddow on Sarah Palin‘). This year there are some eye-catching pairings. Some highlights:

Ted Nugent on Sarah Palin: “If Sarah Palin played a loud, grinding instrument, she would be in my band. The independent patriotic spirit, attitude and soul of our forefathers are alive and well in Sarah…I’d be proud to share a moose-barbecue campfire with the Palin family anytime, so long as I can shoot the moose.”

Sarah Palin on Glenn Beck: “Who’d have thought a history buff with a quirky sense of humor and a chalkboard could make for such riveting television? Glenn’s like the high school government teacher so many wish they’d had [Is he ever!], charting and connecting ideas with chalk-dusted fingers — kicking it old school — instead of becoming just another talking-heads show host.”

Betty White On Sandra Bullock: “I couldn’t be with her in person the night she won the Best Actress Oscar for The Blind Side, but it was just so wonderful to see her be appreciated. (I’ve seen the movie twice, by the way.) What’s so appealing about her in it is her honesty. She’s been labeled America’s Sweetheart, which sounds soft and sweet. Sandra is both of those things, but she also has a strength of her own. She never lets a scene get away from her.”

Olivia Newton-John On Lea Michele: “She is well prepared for superstardom in a role that is tailor-made for her on a creative, original show. It must be so exciting to be Lea. To be in a wonderfully entertaining musical, playing a character whom millions of people around the world adore and whom young girls emulate — tell me about it!”

David Remnick on Barack Obama: “Mahmoud Ahmadinejad shows no evidence of behaving like a member of the Harvard Law Review editorial board. The ability to coordinate the wildly varying political interests of China, India, Russia, Brazil and the rest on issues like nuclear proliferation, human rights and climate change will not likely be affected by the old charms. The gifts of political personality have their distinct limits.”

Cyndi Lauper on Lady Gaga: “Lady Gaga’s art captures the period we’re in right now. These days, you go to a club and wonder who all these kids are. They don’t seem to have jobs. How can they afford to be here? Her song “Beautiful, Dirty, Rich” explains that scene. It’s about the New York prep-school party kids she grew up with. It’s where she came from.”

Hillary Clinton on Nancy Pelosi: “She became famous for being the first female Speaker, and she will always be a role model for women and girls because of her trailblazing accomplishments. But most of all, she will be remembered for the results she’s delivered, the people she’s helped and the progress she’s achieved.”