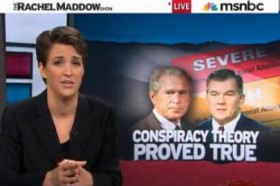 Former Homeland Security Secretary Tom Ridge’s new book has been causing quite a stir this week, with media outlets hyping the “bombshell” revelation that the book proves that the Bush administration manipulated the color-coded “Terror Alert” system for political gain. However, American Spectator’s Caleb Howe has read Ridge’s book, and he calls this frenzy a con job.

Here’s an example of the kind of reporting that’s being done on Ridge’s book:

The kernel from which this story springs is a passage in Ridge’s book in which he describes a meeting with Don Rumsfeld, John Ashcroft, and others. They try to convince Ridge to raise the alert level based on new, nebulous threats by al Qaida. Ridge evinces suspicion of Rumsfeld’s and Ashcroft’s motives, and says of the meeting:

“I wondered, ‘Is this about security or politics?'”

That would put Ridge on par with millions of other Americans, but it isn’t “proof” of anything. Spectator points out that current media accounts leave out an important, earlier quote from the book.

Earlier in the book, addressing the allegations that political pressure had been applied to raise threat levels, Ridge has this to say:

“Let me make it very clear. I was never directed to do so no matter how many analysts, pundits or critics say so.”

As Rumsfeld might say, “Did the administration manipulate terror alerts? You bet. Does Ridge’s book prove that? You tell me.”

Ridge’s doubt was significant enough that he writes that it confirmed his decision to resign. Again, this is persuasive, as is the weak sauce trash talk that Rummy and Ashcroft used to try and sway Ridge, but it isn’t proof.

Far more persuasive is a review of the timing of terror alerts, which Keith Olbermann ran down in a 2005 Countdown segment. Ridge, himself, notes the corrollary between terror alerts and Bush’s approval ratings. Again, this is smoke, not fire.

With many political stories, you’re just not going to have a smoking gun, but that doesn’t mean you should go ahead and carve one out of soap.