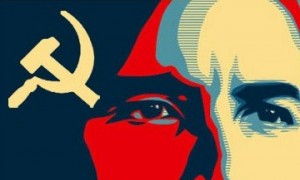 It’s the scourge of media watchdogs left, right, and center: “somesay journalism,” the practice of granting equal footing to the ridiculous. The Associated Press‘ David Crary is out with a textbook example that asks the question, in alternating headlines, “Is Obama a Socialist?” and “Obama A Socialist? Many Scoff, But Claim Persists.”

“Socialist” is a pretty specific word, with a specific meaning, so readers can look forward to a definitive answer, plus the identity of the “many” who scoff, and the source of those “persistent claims,” right?

The 1,250 or so words that Crary spends on the topic could have been knocked out in one sentence: No, the President isn’t a socialist, everybody sane knows he isn’t a socialist, but the people who hate him keep saying he is to make the dumbest people who hate him hate him even more. But, hell, we’re entering Slow News Hell, so a little bit of padding can be forgiven. However, Crary never gets around to making any of those points.

The piece is pegged to the kinda-recent unveiling of President Obama’s new “Forward” campaign slogan, and the right-wing idiocy that attended it:

“Forward,” they asserted, is a word long associated with Europe’s radical left. Its choice reaffirmed their contention that Obama is, to some degree or other, a socialist — a claim that surfaced early in the 2008 campaign and has persisted ever since, fueling a lively industry of bumper stickers and books.

Yes, and another claim, that a young Barack Obama contracted an incurable case of “the cooties,” has persisted even longer in the sandboxes of Indonesia.

Luckily, Crary doesn’t just take “some conservative critics'” word for it, he gets an almost equal authority to weigh in on the other, almost equal side of this perplexing question. “But to many historians and political scientists — and to actual socialists as well — ” Crary writes, “the persistent claim that Obama is a socialist lacks credence.”

He quotes ASO political scientist Terence Ball saying he’s “weary of Obama and the Democrats being called socialist,”and adds that  “If you talk to any real socialist, they disown them very, very quickly.”

Crary then talks to a real socialist,  national secretary of the Socialist Party USA Greg Pason, who tells him that “it makes absolutely no sense,” and that the President’s health care reform “is anything but socialist. It’s bailing out for-profit companies.”

Great, so, story over, right? Obama=not a socialist.

Not quite. Crary then spends several paragraphs talking about how socialism isn’t terrifying to much of the world, and connecting the term’s use to an overarching effort to demonize Barack Obama as whatever kind of bogeyman makes people wet their pants (“stealth socialist,” “secret Muslim”), and he even quotes Mitt Romney saying “I don’t use the word `socialist,’ or I haven’t so far.”

With evidence mounting that the President probably isn’t a socialist, Crary throws in this bit of balance:

Steven Hayward, a resident scholar at the American Enterprise Institute and author of a two-volume biography of Ronald Reagan, said Obama is not a socialist under the strict definitions of that term — central economic planning and government control of production.

“However, socialism has a secondary meaning that is harder to explain — government regulations, supervision of the private economy,” Hayward said.

I hate to point this out, but since Crary doesn’t bother to, I will: “government regulations, supervision of the private economy” is not a “secondary meaning” of socialism, it’s the primary meaning of having a government. It’s why I can’t take a piss in an aluminum can and call it “Budweiser.”

Crary sums up the piece with another vote in the “no” column, though, citing Ezra Klein opining that “If President Obama is truly a socialist, then he’s not a very good one.”

Ezra Klein wasn’t treating this like an actual question, though, he was mocking the obviously false claim that liars have foisted upon knuckleheads to try and get them to deny themselves health care. Yet even though everyone in the world, except people who hate Barack Obama, even though people like political scientists and actual socialists and President Obama know he’s not a socialist, the claim persists. What’s a journalist to do?

How about this: President Obama is not a socialist.