The Media And Obama Handle Christianity Poorly – According To One Atheist 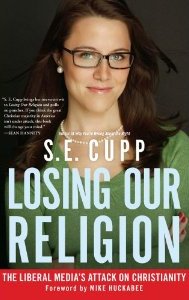 The latest book from a conservative pundit takes aim at the media and praises Christianity…but with a twist. It’s written by an atheist.

S.E. Cupp‘s Losing Our Religion came out last week, and we talked to the frequent FNC and CNN guest about how the media covers religion, how Pres. Barack Obama handles Christianity and why an atheist would pick this topic to cover.

Mediaite: You probably get this question a lot, but throughout the book you describe yourself as being an atheist. What makes an atheist pick this topic to write about?

Cupp: I’ve always been fascinated by religion. I’m getting my Masters in religious studies, I’ve always studied religion and written about religion. Being an atheist doesn’t do anything to quash that fascination. And I’ve been asked a lot, ‘What business does an atheist have writing a book that defends Christianity, how could an atheist do that?’ I always respond ‘Very objectively.’ Because I’m writing about this from the outside and don’t really have a dog in this fight, I would hope it gives a little more credibility to the project than having some fundamentalist Christian write about attacks on Christianity.

“Christian America just does not see this President as a convincing supporter of faith. And I don’t blame them.”

Mediaite: But to play Devil’s Advocate a little here, why would you want the media to talk more about God, if you don’t believe that concept exists?

Cupp: Well yeah, it’s not that I want them to talk about God more arbitrarily. I want them, when they do talk about God, to be a little more respectful of the fact that 90% of this country believes in God and 80% is Christian. To slap 80% of the country in the face on a regular basis and basically telegraph that their values don’t matter or their values are dangerous I think isn’t honest journalism. That’s not honest reportage. I think this country deserves a better more responsible press.

Mediaite: Recently in the news was is the National Day of Prayer, which the White House canceled the service of, and Franklin Graham was removed from event. But Pres. Obama also recently met with Billy Graham for the first time.

Cupp: They can’t cancel it. It’s legally mandated that the President sign the proclamation every year. Some presidents sign more than one a year. The president signed it last year and the liberal media made a big deal about it even though he was legally mandated to do so. No one made a big deal about the fact that he skipped the prayer services which most Presidents don’t do. But again that’s really indicative of the way the liberal media protects Obama, and he’s very uncomfortable with public worship. It’s almost like the media and the Obama administration are allies in this war right now.

Mediaite: Do you think Obama meeting with Billy Graham done anything to quell concerns that Christian Americans have?

Cupp: No. He’s met with rabbis, he apparently gets private sermons up at Camp David. All of that is fine. Much is private and not for public consumption which is odd in and of itself. The fact of the matter is the president is continually elevating atheism to the status of other faiths when they have nothing to do with one another. He’s constantly trying to preach superiority of science over faith. He’s made a number of gaffes that were interpreted by religious America as a slap in the face. Covering up religious insignia at Georgetown, just a terrible decision, but went virtually uncovered by the media. Skipping out on the National Day of Prayer, the guns and religion gaffe while he was campaigning. Christian America just does not see this President as a convincing supporter of faith. And I don’t blame them.