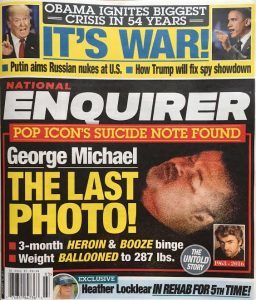 The most recent cover of The National Enquirer features a photograph of George Michael. He looks to be lying down with his eyes, closed, and the cover reads, “George Michael THE LAST PHOTO!” It also says “Pop Icon’s Suicide Note Found.” The problem is that this isn’t actually how the photo was taken. Our cousin site Gossip Cop, who has been busting bad dish for years writes, “This is a blatant manipulation. In actuality, the publication took a grainy, previously published paparazzi photo of Michael and rotated it 45 degrees. As a result, it appears as if Michael is laying dead, when in reality, he was upright at a dinner party when the picture was taken.”

Gossip Cop notes that ” The National Enquirer doesn’t explicitly say it is a ‘death photo,’ but that certainly seems to be the implication by the way it is abnormally featured.”

Additionally, the “suicide note” mentioned on the cover isn’t actually a suicide note at all. Instead, the tabloid put together “words from a series of interviews” that he gave long before he died. Within the article, the magazine admits that the photo was taken two months before he died, which Gossip Cop says is “likely only done to remove liability and prevent the outlet from getting sued.”