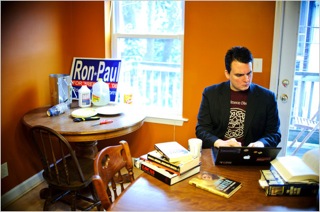 What’s in a generation? The New York Times took a gander at profiling the famous-for-being-young crowd of political bloggers in Washington, DC now rapidly approaching their thirties on Friday, alternately referring to them as “brat packers” the “juicebox mafia,” and analogs to the characters (not actors) of St. Elmo’s Fire. But in labeling them upstarts in political media, the Times has exposed itself as out of touch with how rapidly generations of writers mature outside the print world.

The group of somewhat progressive, mostly white, mostly male bloggers the Times rounded up is a list of usual suspects: Dave Weigel, Ezra Klein, Brian Beutler, and Matt Yglesias to name a few, and the justified critiques center mostly around how the piece ignores more diverse writers of the same generation and status. But aside from its narrow perspective on who counts as a young reporter based on background, the piece seems to completely ignore the extensive experience of the people they have deemed Washington’s upstarts. Aren’t reporters who have been on the beat for so many years a little too old to be so young?

The writers profiled, at least, seem to think so, insisting throughout the piece that they are not “spring chickens,” that they have gotten “a little bit older and a little more boring,” that they can’t even find time to play trivia together anymore. Outside the piece, Klein retweeted a list of “actual young D.C. pundits.” Throughout the piece and the subsequent reaction, there is the sense that the writers profiled are an isolated generation, and that they perceive themselves as a distinct generational entity from those five or ten years their junior in a way that older reporters did not distinguish themselves from each other. This, one expects, can be attributed to the easing of the process by which one becomes a pundit in the internet age. The advent of blogs has julienned our generation into slivers of narrow, discrete age classifications sometimes no more than three of four years apart, something impossible to imagine several decades ago.

When those indefatigable whippersnappers Bob Woodward (then 29) and Carl Bernstein (then 28) took on the “snarling prunes” of the Nixon administration, they didn’t have an army of young adults consuming their work for five or six years prior to their career-making reports. The print journalism hierarchy was constructed to prevent anyone without experience, no matter how knowledgeable, from achieving any modicum of influence. Or, as Professor Douglas Brinkley explains in the New York Times profile, “before, people would start in foreign bureaus all over the world before making their way to Washington. You would be pushing into your deep 20s and have a really deep global background.” Woodward and Bernstein were pushing it trying to make a name for themselves before the age of 30.

The internet has changed all that. For writers like Weigel and Klein, an entire class of writers grew to political maturity as they ascended to political fame (like, for example, the third of the Mediaite staff that has yet to make it to age 25). As Andrew Sullivan argues in the piece, they rerouted the aspirations of an upcoming generation of writers for whom a job in print media was once the holy grail. Instead, the teens reading Klein at the Prospect of Weigel at Reason shot for internet branding fame, and the ease with which the internet allows access to influence for young writers is such that, five years down the line, those teens are in their early 20s and populating a significant enough chunk of the media world that a number of us are left scratching our heads at the idea that these writers are new kids on the block.

Not that these reporters are actually old. This is not a scenario like Rep. Eric Cantor‘s middle-aged “young guns“– the only context in which they could legitimately be considered “too old” is, perhaps, attending a Justin Bieber concert. But the New York Times‘ understanding of a younger generation of bloggers still consisting of the same group of writers as those they chose to highlight here– or their complete neglect of early-20s writers in opting to call those with more experience in the business the younger ones– demonstrates a lack of understanding of just how quickly a young consumer of media can become a young producer of media on the web, and how those young producers of media can quickly find themselves shifting roles from proteges to role models.