The NYT Profiles Fox News’ The Five: ‘Like A Family At Thanksgiving’ 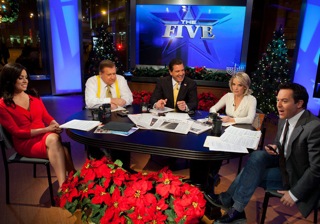 The headline quote is not actually part of the text of Brian Stelter‘s eye-opening report on Fox News’ surprise hit The Five, but a description of the atmosphere from the inimitable Bob Beckel. He, along with producers and other co-hosts, spoke to Stelter in this week’s New York Times report that exposes several surprises about the show– the hosts were told they were trying out for a weekend hosting gig, for one– and tries to get to the bottom of its success.

The profile begins explaining how the stressful beginning of the post-Glenn Beck era at Fox News required something– anything– to fill in that spot: anything that wasn’t an imitation of the spot’s previous owner. “About a week and a half before Mr. Beck signed off, Mr. [Roger] Ailes wrote the words “The Five” on a piece of paper,” Stelter writes. “Looking to the ABC talk show “The View” and to the time of day as inspiration, he pictured five co-hosts who could argue about the day’s top stories without feeling antipathy for one another. When announced on June 30, Mr. Beck’s last day, “The Five” seemed to be a temporary fix — even to the co-hosts, who were initially told they were just trying out for a weekend show.”

The interviews with the cast show that the warmth on-screen exists in real life, as well. Greg Gutfeld corroborated Beckel’s claim that the political talk resembled Thanksgiving dinner, adding that the crew “feel bad about it afterwards” when they get too aggressive in a political conversation. Beckel attributes the success of the show to not having a single host, and giving the audience hosts to choose from, while Dana Perino gave an example of what it’s like to have fans walk up to her (they mostly ask if Beckel, the only liberal on the panel, believes what he says).

Stelter concludes that The Five, as well as “several lower-rated talk shows that started on MSNBC this year are representative of a continued shift on cable to talk about the news and away from actual news reports.” The observation that cable news viewers tune into shows like The Five (and what can be considered it’s more liberal counterpart, MSNBC’s Up with Chris Hayes) because they are drawn by the opinions of the personalities at the helm and not necessarily by the need to know the news may sound outrageously behind the curb, but Stelter seems to be getting at something more than the idea that opinion-driven shows are more popular than news-driven ones. Beyond having opinions, the new generation of cable news talk shows spearheaded by The Five have personalities, characters and character arcs that are worth tuning in for. Stelter is correct (albeit a little late) in pointing out that people tune in for talks about the news rather than “actual news reports,” but they’re not even tuning in for the chat part of the show as much as they are for the personalities anymore, the way a viewer would tune into Bill O’Reilly or Lawrence O’Donnell.

Sure, viewers tune in to find out what Andrea Tantaros thinks of the payroll tax holiday– and not just to find out information about the payroll tax holiday– but they also tune in to hear about the misadventures of alliterative larger-than-life figures like Bob Beckel or Greg Gutfeld, about the time Eric Bolling ran into Ed Schultz at a bar or to watch Dana Perino cringe, then partake, in a segment full of sexy double entendres. Unlike the previous, host-driven generation of opinion shows, The Five adds a refreshing new element to cable news– a plot.