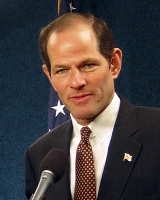 This is part 3 of the 100-part review of The Overton Window: a 400-word review of the book. Yes, that’s Eliot Spitzer.

You may be wondering what Eliot Spitzer is doing here. So were the main characters of The Overton Window, when he showed up in their elevator midway through Glenn Beck‘s first thriller. It was a lighter moment (the phrase “total horndog” is used) in a mainly-serious, sometimes-hopeful but ultimately cautionary novel about a powerful government and even more powerful forces that can control it. Beck’s main point: be careful, because if you’re not, this could be coming.

Our protagonist is Noah Gardner, a privileged, cocky New Yorker with a cynical and vast knowledge of “truth” and a megalomaniac PR guru father. His love interest is Molly Ross, a headstrong, staunch anti-government activist libertarian who hates smoking and can deftly handle a firearm (who is not what she seems). Together they travel from a tea party at an NYC bar – where a peaceful gathering turns into a night in jail due to cops, not gatherers – to the Nevada desert (to stop the bombing of the Senate majority leader’s office – yes). There’s a side storyline with Danny Bailey, a YouTube-sensation tea partier (a slightly-toned-down Jason Mattera) and deep-cover FBI agent Stuart Kearns, that’s more action than teaching.

Between the excitement (gun fights, dramatic deaths, waterboarding!), there are lengthy speeches that sometimes last for a dozen pages or more. These are mostly the “fact” part of your “fiction” – and drag the story a bit. But it is a testament to the persuasive writing that even when the “bad guy” is speaking, the content can be very convincing. Noah’s father’s speech on the “useless eaters on the savage side of the bell curve” displays quite a different kind of patriotism.

Some characters make brief appearances and are forgotten. An ex-mercenary security guard seems like an antagonist but is gone before he’s remembered. A female doctor friend of Noah’s is around for a page. But maybe, as Beck has hinted, they’ll have bigger roles in a sequel.

Most unique are the final 28 pages – an afterward of facts to back up events and conversations in the novel. One article cited is from April 13 of this year – a testament to how meticulous and up-to-date Beck made his thriller. And Spitzer’s in there too. As Beck notes, “Spitzer really could have run into Noah and Molly in that elevator car on the Upper East Side of Manhattan.”