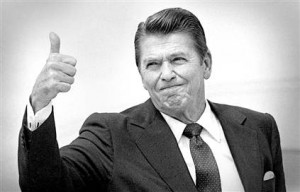 Recent speculation that Sarah Palin may announce her decision to join the 2012 presidential race on Ronald Reagan’s 100th birthday as an homage to the former president comes as a reminder of the present-day conservative notion that the Reagan era was a shining moment in conservative politics. Unfortunately for those like Palin who rely on this claim, author Peter Beinart has a whole lot to say on the contrary.

In the July/August issue of Foreign Policy magazine, Beinart takes on this concept of Reagan as a pillar of conservative ideals and disproves it in a lengthy essay (extracted and adapted from his new book The Icarus Syndrome: A History of American Hubris) that delivers blow after crushing blow to the stylized image of the Republican president.

The essay is divided in seven parts, each debunking a commonly held misconception about how uber-Republican Reagan really was. From his hardcore stance on foreign policy to his supposed similarities to Dubya, nothing about the Gipper’s persona is safe. Think he was tough as nails as Commander-in-Chief? Think again:

“He launched exactly one land war, against Grenada, whose army totaled 600 men. It lasted two days. And his only air war — the 1986 bombing of Libya — was even briefer. Compare that with George H.W. Bush, who launched two midsized ground operations, in Panama (1989) and Somalia (1992), and one large war in the Persian Gulf (1991). Or with Bill Clinton, who launched three air campaigns — in Bosnia (1995), Iraq (1998), and Kosovo (1999) — each of which dwarfed Reagan’s Libya bombing in duration and intensity. Do I even need to mention George W. Bush?”

And you know how Reagan overpowered Gorbachev and forced him to “tear down this wall”? Um, yeah… about that:

“From virtually the moment he took office, Gorbachev was desperate to cut military spending, which by the mid-1980s constituted a mind-bending 40 percent of the Soviet budget. But within the Politburo, vast unilateral cuts would have been politically impossible; Gorbachev needed an American partner. And once he found that partner in the less-menacing second-term Reagan, Gorbachev was able to convince his Kremlin colleagues that the Soviet Union could risk losing its Eastern European security belt without fearing Western attack.”

In his most controversial assessment of Reagan, Beinart proposes that he might end up having more in common with Obama than Bush in the long run, citing the similarities in the political environment when Reagan and Obama entered the presidency. Whether this proves to be true or not, Beinart has thrown the book at misguided conservatives in the form of a 3,628 word essay – hard to finish for the average web surfer, painful to get through for devout Reaganites.