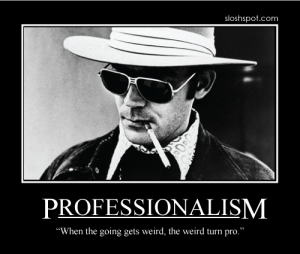 Hunter S. Thompson is a hero to many modern-day journalists, even those with little interest in driving around the desert with a trunk filled with “two bags of Grass, seventy-five pellets of mescaline, five sheets of high-powered blotter acid, a salt shaker half-full of cocaine and a whole galaxy of multicolored uppers, downers, screamers, laughers…. also a quart of tequila, a quart of rum, a case of Budweiser, a pint of raw ether, and two dozen amyls.”

Thompson was an out-of-control enfant terrible with an often-gimmicky writing style, but he was also a damned good reporter. Hell’s Angels proved that he could do investigative journalism with the best of ’em, and most earnest Washington reporters can only dream of writing campaign coverage as honest and refreshing as Fear and Loathing on the Campaign Trail ’72.

But yeah, the whole enfant terrible thing: definitely not an exaggeration. In 2001, Thompson wrote the following very angry, very expletive-ridden letter to a studio exec who he felt was taking too long to make an adaptation of his book The Rum Diary:

(Letters of Note has a scanned copy of the original that highlights Thompson’s unique penmanship and punctuation.)

Okay, you lazy bitch, I’m getting tired of this waterhead fuckaround that you’re doing with The Rum Diary.

We are not even spinning our wheels aggresivly. It’s like the whole Project got turned over to Zombies who live in cardboard boxes under the Hollywood Freeway… I seem to be the only person who’s doing anything about getting this movie Made. I have rounded up Depp, Benicio Del Toro, Brad Pitt, Nick Nolte & a fine screenwriter from England, named Michael Thomas, who is a very smart boy & has so far been a pleasure to talk to & conspire with…

So there’s yr. fucking Script & all you have to do now is act like a Professional & Pay him. What the hell do you think Making a Movie is all about? Nobody needs to hear any more of that Gibberish about yr. New Mercedes & yr. Ski Trips & how Hopelessly Broke the Shooting Gallery is…. If you’re that fucking Poor you should get out of the Movie Business. It is no place for Amateurs & Dilletants who don’t want to do anything but “take lunch” & Waste serious people’s Time.

Fuck this. We have a good writer, we have the main parts casted & we have a very marketable movie that will not even be hard to make….

And all you are is a goddamn Bystander, making stupid suggestions & jabbering now & then like some half-bright Kid with No Money & No Energy & no focus except on yr. own tits…. I’m sick of hearing about Cuba & Japs & yr. Yo-yo partners who want to change the story because the violence makes them Queasy.

Shit on them. I’d much rather deal with a Live asshole than a Dead worm with No Light in his Eyes…. If you people don’t want to Do Anything with this movie, just cough up the Option & I’ll talk to someone else. The only thing You’re going to get by quitting and curling up in a Fetal position is relentless Grief and Embarrassment. And the one thing you won’t have is Fun…

Okay, That’s my Outburst for today. Let’s hope that it gets Somebody off the dime. And if you don’t Do Something QUICK you’re going to Destroy a very good idea. I’m in the mood to chop yr. fucking hands off.