This Exists? One-Ton Croc Caught In The Philippines, Second Thought To Be Lurking

There were big parties this weekend in Bunawan in the southern Philippines. Following a three-week hunt for the thing, villagers were relieved to see a 20-foot, one-ton saltwater crocodile hoisted by crane from a creek and tied onto a truck to be taken far, far away. According to the AP, wildlife officials think it might be the biggest crocodile to ever be caught, and more frightening yet, that it might have an even bigger mate still lurking nearby. 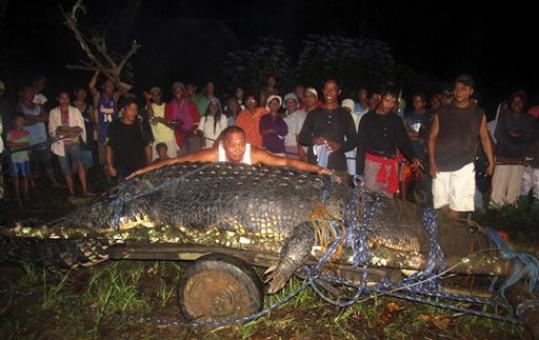 Showed above in a photo from the AP, the thing weighed 2,370 pounds and was thought to be at least 50 years old. Bunawan, a township in the Philippines more remote south, has been haunted by the creature in recent years: a child was killed two years ago, a fisherman went missing earlier in the summer, and a water buffalo was killed just last month.

“Nuisance crocodile” hunter Ronni Sumiller was brought in a few weeks ago, and with the help of five locals trained to help and 20 steel cable traps, he was able to bait and capture the beast. Sumiller says he pans to make the crocodile, kept alive because of its endangered status, “the biggest star” in his ecotourism park.

Before that, though, there is the issue of what to do with the second and larger croc. “The villagers were saying 10 percent of their fear was gone because of the first capture,” Sumiller said. “But there is still the other 90 percent to take care of.”

This sort of story raises a lot of questions, the most obvious being: has the picture photoshopped? Bunawan is 515 miles south east of Manila, where the story was reported from following a phone call with Sumiller. This wouldn’t be the first time a doctored animal slipped into the news, hogzilla and the Puerto Rican street shark being just two recent examples. Saltwater crocodiles have been known to live to 100 years and to grow to 23 feet, though, so it’s not implausible that Sumiller caught himself a real monster. As we’ve said before, nature just tends to look scarier in photographs. Either way, we welcome any naysayers to make their way to his ecotourism park for the creature’s debut and report back on their findings. We’ll be waiting, safety, right here.