Since Tiger Woods first picked up a golf club, he’s lived life with a camera in his face or a notebook-toting reporter following his every move. Most of it’s been positive: Look at the little two-year-old swing that club! Look at the teenage phenom plow through the amateur ranks! Look at the 21-year-old win the Masters! Records fell, the press was in awe, and as he grew in age, so did golf in stature. As much as the PGA Tour would like to sell you on the greatness of many of its players (and believe me — they try very, very hard), the sport just isn’t as compelling without Tiger. (Just look at how dreadful the television ratings were for the tournaments he missed during the time he took off to recover from knee surgery.) For the Tour — and most of the sycophantic golf writers who cover him — a tabloid–fueled story of this magnitude puts many of them in an unenviable position. Especially when it comes to reporting the truth.

Until now, Tiger has largely avoided controversy. After a ’97 GQ article revealed his fondness for telling dirty jokes, he became even more guarded when talking to the press. He’s a fine-tuned media machine, giving concise, bland responses that offer no room for misinterpretation. He doesn’t try to charm the public; simply because we love him regardless — what he does on the golf course makes up for his lack of warmth. Before this past weekend, his only public shortcomings were cursing and throwing clubs on the golf course. Other than that, we know very little about Tiger’s personality. We know even less about his supermodel Swedish wife, for that matter. I don’t think I’ve ever heard her utter a word, and that’s probably not by chance. Remember when the shipbuilding company he commissioned to build his yacht used his name and photos of him and the yacht as promotional materials without his permission? He sued them — and won. Somewhat humorously, he named the boat, “Privacy.” Duly noted.

This is also unfamiliar territory for the media that covers him. Even though many columnists are prodding Tiger to tell the truth, they’re doing it for selfish reasons — they want to stop writing about it, too. It makes their jobs a lot tougher if one of the greatest athletes of any generation with a pristine reputation turns out to be a(n) (allegedly) womanizing jerk who is (literally) above the law. The media is so enamored by Tiger that even if he were to spit in an old lady’s face or slap a child taking a picture of him in the middle of his backswing, many writers would still probably find a way to compliment him on his competitive drive.

And the vaunted Tiger Woods PR Team — one that had successfully kept his private life under wraps for so long — failed miserably this time around. Most likely because they’re having as much trouble unearthing the truth as everyone else is. It’s tough to spin things when the facts are so blurry. It wasn’t until 12 hours after that we first heard he was in an accident and initial reports stated he was “seriously injured.” Then, the information we received from various news outlets, including TMZ, kept changing and it’s only become more absurd – mostly because Tiger has yet to hold a formal press conference on his 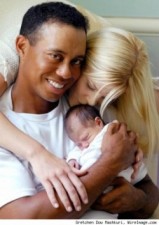 turfed-up front lawn with a bandaged face. On Sunday, Florida Highway Patrol troopers went to the Woods’ residence for a scheduled interview, only to be turned away. For the third time. To complete the stonewall, the FHP was then contacted by Mark NeJame, a high-profile criminal defense attorney known as the “Johnnie Cochran of Orlando,” who informed them he was now representing Tiger.

But Tiger might not be able to hide for much longer. According to TMZ, sources claim the FHP is now seeking a search warrant to procure medical records from the hospital that treated Tiger to determine whether his injuries were sustained from his car accident or domestic violence. While there are still many questions left unanswered, Tiger has made one thing very clear: he’s not talking. Unless you count the robotic PR message he posted on his website Sunday afternoon as “talking.”

The traditionally conservative golf media and Tour are, not surprisingly, skittish about reporting this story. Writers from the major golf outlets have treaded very carefully with their coverage. Golf Digest, one of the largest golf publications in the world, has only posted AP articles and no personal opinions from their columnists on their website — for good reason, considering they are one of Tiger’s sponsors. But even in the worst case scenario — that he did have an affair with Rachel Uchitel; that he was fleeing his house at 2:25AM after a fight with his wife; and that the accident was caused because she was chasing him with a golf club — his sponsors will still pay him lots of money to sell their products and fans from around the world will still follow his every move on the golf course. In the end, with whatever shred of truth about this story eventually leaks out, the only thing that it will prove is that Tiger is, in fact, larger than life. We just have to deal with it.

Update – Florida Police have announced Tiger Woods will be issued a careless driving citation for the crash outside his home last week, Florida Highway Patrol claimed earlier today. The spokesperson also claimed that there would be no allegation of domestic abuse on either side. – Colby Hall

Stephanie Wei lives in NYC. She graduated from Yale University in 2005, where she majored in History and was a member of the Women’s Golf Team. She blogs regularly about golf at weiunderpar.com.

(image via The Other Brooks Brother)