TNR Cover Story: The Washington Post Is “A Company In Chaos”

TNR Cover Story: The Washington Post Is “A Company In Chaos” 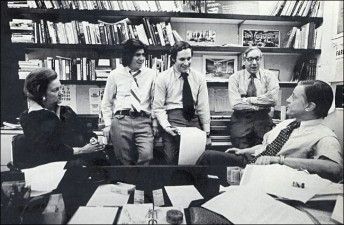 Over the weekend, we teased Gabriel Sherman‘s The New Republic cover story on the flailing Washington Post — fallen from grace and under the new management of publisher Katharine Weymouth and editor Marcus Brauchli. Now, the entire story is available online and it’s exactly the extensive chronicle of dysfunction and mismanagement that we expected, beginning chiefly with WaPo‘s infamous salongate.

The summertime controversy — “off-the-record salons at which sponsors would pay to mingle with D.C. eminences and Post writers” — is revealed as the brainchild of publisher Weymouth, and as a result of her inexperience and thirst to return the paper to its glory days of exclusivity under her grandmother.

“It’s like, oh God, who are these people?” an anonymous senior Post staffer is quoted as saying. The piece is largely constructed around anonymous, occasionally vague complaints like these. On the record quotes from past or current staff tend to be favorably, if a little defensive, as is wont to happen in a company exposé of this scale. Sourced by “50 current and former reporters, editors, Web staffers, and business employees” the Sherman piece outlines the paper’s “indentity crisis,” calling it both ” paralyzed and trapped” even when compared to other struggling newspaper behemoths like the New York Times and Wall Street Journal.

Meanwhile, the tense, even hostile, relationship between the print and online divisions hasn’t made the paper’s search for a coherent identity any easier. And so, in a new era for journalism, The Washington Post has yet to figure out what it wants to be. The result has been a lot of lurching–some of it (like salongate) embarrassing, much of it merely ineffective, but almost all of it suggesting a newspaper in disarray.

In addition to a weighty history lesson, Sherman provides a who’s who of Post staffers — seminal, controversial and indispensable — and the decisions they’ve guided, including a steadfast focus on print vs. the web. Sherman writes:

The conclusion was that print was just too valuable to deemphasize. To illustrate the point, according to one participant in the meeting, Hills put up a chart showing that a daily print subscriber represents $500 in revenue for the paper, while a website reader brings in only $6. “In Steve’s presentation, he was completely focused on the print paper,” the participant recalls. “If you sat in these meetings, the biggest problem was the person who runs the business side doesn’t care about the Web. You bring up mobile and he gets uncomfortable.”

And there’s no need to drive home the point being made with the above decision: ignore the internet and you’ll flounder, eventually, if not now. “Philosophical divides” or not, harmony must be achieved, but it remains elusive at the paper. “At the Post, the Neanderthals won,” said a former online staffer.

You can read more about the Post‘s internal divisions, hiring practices and legendary figures like Bob Woodward in the rest of Sherman’s cover story, available here in full.