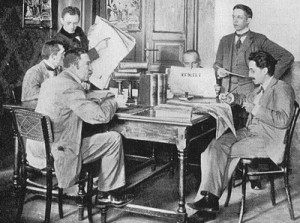 3. From Mashable, “Want to Find Marijuana? There’s an App for That“

iPhone apps can find just about anything. They can help you find a job, locate your friends, or just pinpoint a gas station. But a new app is promising to find you something far more controversial: marijuana.

By Internet Law, an iPhone app that has something to do with marijuana requires 1) a “There’s an App for That” reference somewhere in the article (or better yet, in the headline) and 2) “controversy.” Mashable does not disappoint. So bad it’s good?

It is, however, helpful to know that this app will “lead thousands of iPhone users to cannabis” and that it is “a tool of a movement in favor of marijuana legalization.” Also, the comments are pretty great.

2. From The Boston Herald, “T driver pleads not guilty“:

The accused texting T driver railed against prosecutors today for slapping him with a charge that was used more than a century ago to prosecute “choo-choo train” engineers.

Proof that local news is a better read than all other news, especially out of context. As of press time, this is the only story on the first page of Google News with the phrase “choo-choo train” that is not about adorable youngsters or Chattanooga. Bonus points for the “railed” pun.

Time to take the doughnuts.

A Queens cop has been helping himself to doughnuts and coffee at a Rockaways Dunkin’ Donuts — even jumping behind the counter to make himself sandwiches and cram his face full of crullers, the shop’s manager said.

The Post gets a lot of credit for their spicy headlines; the pitch perfection of their ledes is sometimes overlooked. Also, it is funny that cops like doughnuts, which is why a cop who steals doughnuts using broad physical comedy is Post gold. Cramming crullers, indeed.