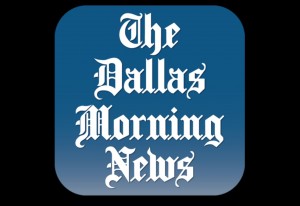 This morning, the editorial board of The Dallas Morning News has finally weighed in on the general election candidates, calling Republican nominee Donald Trump, “…no Republican.”

The News, which formally endorsed Mitt Romney in 2012 and John McCain before that, excoriated Trump on its front pages this morning, picking apart each facet of his candidacy and policies. “Inexplicably,” the editorial board write, “the presidential candidate who emerged from that ideological tug of war was the one who thumbed his nose at conservative orthodoxy altogether. Trump is — or has been — at odds with nearly every GOP ideal this newspaper holds dear.”

The News continues in no uncertain terms, “Donald Trump is no Republican and certainly no conservative.” (Cue up Trump’s Tweet bashing Dallas Morning News‘ low readership in 3, 2, …)

Trump, the real estate mogul who largely hijacked American conservatism, gets raked over the coals in the piece for his admiration of Russian president Vladimir Putin, his skewed views on “fiscal conservatism,” and his reckless rhetoric on national defense.

“Regardless, his ideas are so far from Republicanism that they have spawned a new description: Trumpism,” they write, months after formally endorsing Ohio Governor John Kasich in the GOP primary.

And in case you were unsure up to this point about where the Morning News stands with its views of the new Republican standard-bearer, the editorial concludes with, “Donald Trump is not qualified to serve as president and does not deserve your vote.”

Tomorrow will be the official “recommendation” from the News about the its pick… so, you’re telling me there’s a chance Trump’s your guy?