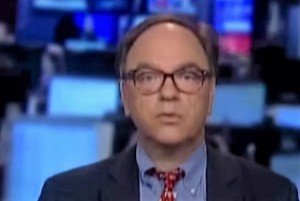 Immediately following Democratic presidential nominee Hillary Clinton‘s blistering excoriation of Republican rival Donald Trump‘s embrace of the racist “alt-right” movement, a Wall Street Journal reporter helped to illustrate how it is that Trump has gotten as far as he has. While some have noted the mainstream media’s reluctance to identify racism and white resentment as key components of Trump’s allure, WSJ’s James Grimaldi seems to think such judgments are not even the job of objective reporters.

In a telling exchange with Fox News’ Shep Smith following Hillary’s speech, Grimaldi repeatedly ducked the question of whether Trump has earned the condemnation that Clinton heaped on him, and finally just said he’d leave that sort of thing up to “opinion” journalists:

Well, I’ll leave that up to the commentators to talk about whether he is—you know, people who have, on the opinion side are probably more apt or able to talk about whether he is racist or racism. I quote what people say, you know? She quoted Paul Ryan, the speaker of the house, saying that one of his statements was trademark, I guess, textbook racist. I’m not one to generally label people like that. So I would pass on that question.

It is one thing to say that a particular issue is too gray an area to pass judgment on, but what Grimaldi is saying is that no reporter anywhere can ever objectively report anything to be racist, not even the explicit charge that someone can’t do their job because of their Mexican heritage. Newsrooms need to do a better job of drawing lines like these, because no one looks good through the lens of history saying “some say…”