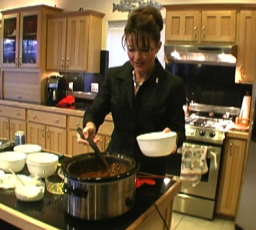 In addition to Palin being upset during her reality show that the first lady was trying to take away her dessert, she also said in a recent radio interview with Laura Ingraham:

What [Michelle Obama] is telling us is she cannot trust parents to make decisions for their own children, for their own families in what we should eat . . . instead of a government thinking that they need to take over and make decisions for us according to some politician or politician’s wife priorities, just leave us alone, get off our back and allow us as individuals to exercise our own God-given rights to make our own decisions.

In an editorial titled “Palin’s Food Fight,” the Journal admits they hate the “nanny state” of government monitoring and forcing its citizens to do anything, but doesn’t see the first lady’s efforts as anything more than “telling kids to eat their vegetables and run around the block” and “to take responsibility for their own choices.” The editorial even uses Palin’s words against her, pulling a quote Palin said in 2009 that easily could be confused for the first lady today:

Health-care reform on an individual basis is often just this simple: We could save a lot of money and a lot of grief by making smarter choices. . . . It starts by ending destructive habits and beginning healthy habits in eating and exercise.

The most damning critique of Palin, is the advice that she “would be more effective if she made some distinctions among the Obama policies that really are worth opposing.” With the implication being Palin is too simple-minded to comprehend which Obama policies might actually be beneficial or is too partisan to care, the real story here is why are conservative intellectuals at the Wall Street Journal sharpening their knives for Palin?

With no frontrunner for the GOP 2012 presidential nomination besides Palin, the elites on the right (yes, “elite” is not a term exclusive to the liberal side) are clearly fretting over the possibility she could be their nominee. And with Fox News contributors Dana Perino and Juan Williams just yesterday questioning Palin’s capacity for intellectual discourse, it seems this drumbeat is getting louder from all corners.

In the end, Palin should not worry too much about these critiques because her unpredictability, authenticity and unpolished tone, the very characteristics that frustrate the “experts” in the media, are precisely what keeps her passionate supporters coming back for more helpings of what she continues to serve.

Check out the full editorial.