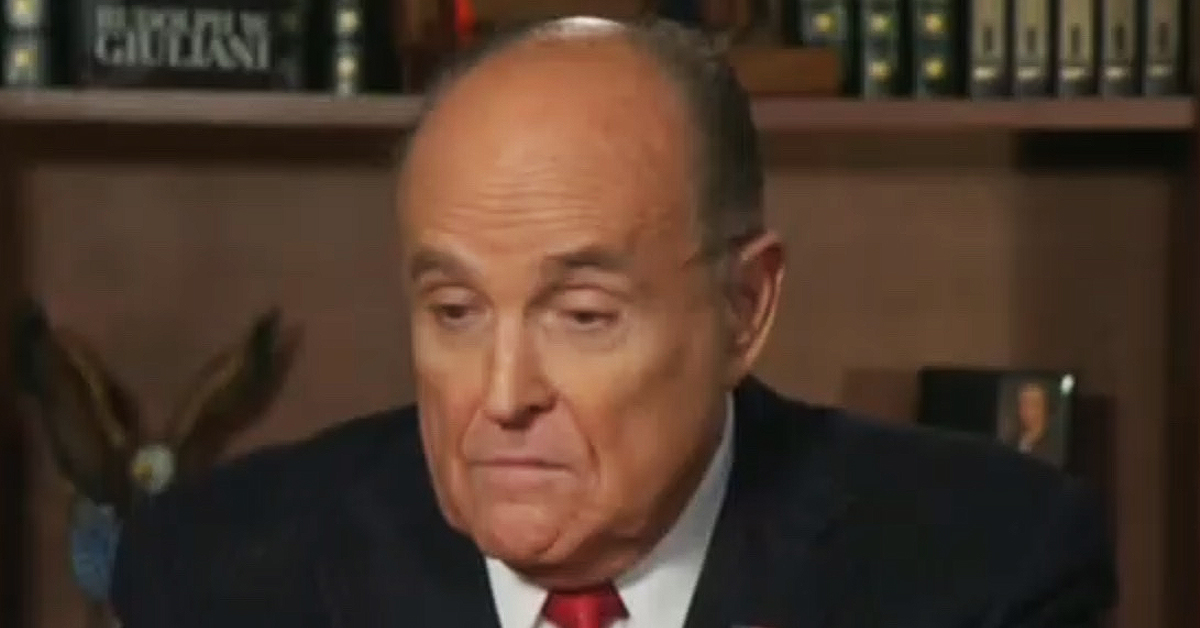 A huge Washington Post story that was published on Thursday got a retraction/correction added on Saturday, with the paper also deleting the associated tweet and issuing a correction tweet.

The original story stated in the second paragraph that One America News and Rudy Giuliani had been warned by the FBI about being targeted for Russian disinformation. Ironically, it was this claim about media disinformation that was corrected.

Correction: An earlier version of this story, published Thursday, incorrectly reported that One America News was warned by the FBI that it was the target of a Russian influence operation. That version also said the FBI had provided a similar warning to Rudolph W. Giuliani, which he has since disputed. This version has been corrected to remove assertions that OAN and Giuliani received the warnings.

Here is a side-by-side to illustrate the difference. 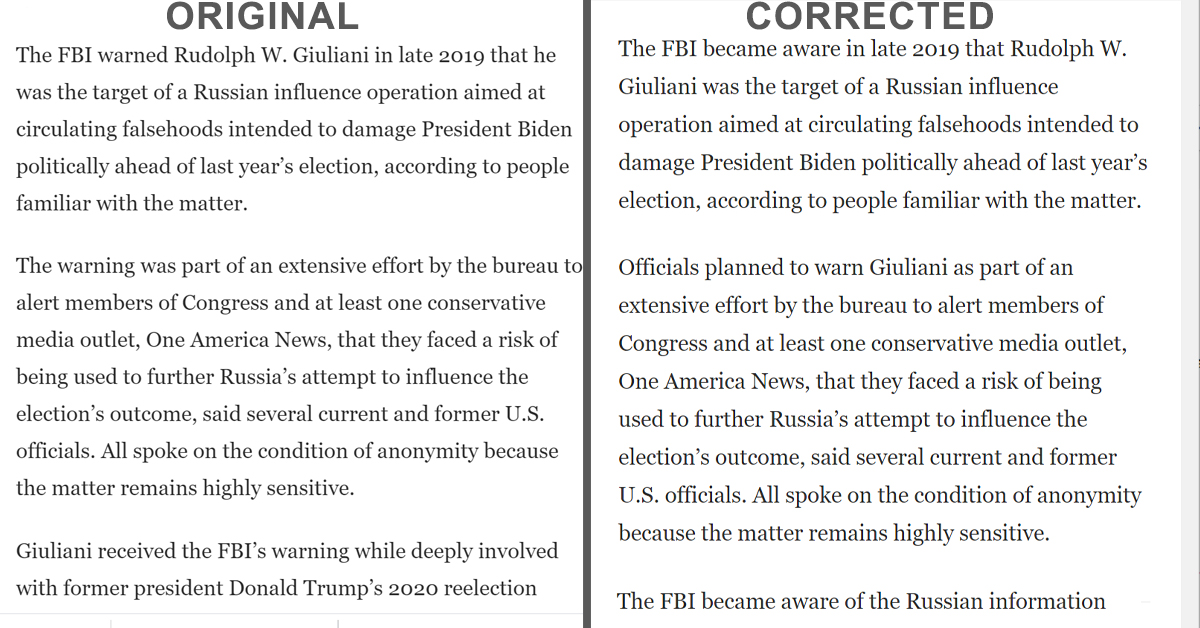 In the first version, on the left above, the report says that the FBI “warned” Giuliani “that he was the target of a Russian influence operation aimed at circulating falsehoods intended to damage President Biden” back in 2019, as part of their effort to “alert” people and groups, including One America News, that a Russian influencer operation had targeted them.

In the corrected version, on the right above, it says that officials “planned” to warn Giuliani and OAN.

Further down in the original article, it said:

The warning, made by counterintelligence agents, was separate from the Justice Department’s ongoing criminal probe, but it reflects a broader concern by U.S. intelligence and federal investigators that Giuliani — among other influential Americans and U.S. institutions — was being manipulated by the Russian government to promote its interests and that he appears to have brazenly disregarded such fears.

The plan to warn potential targets was separate from the Justice Department’s ongoing criminal probe of Giuliani, but it reflects a broader concern by U.S. intelligence and federal investigators that he — among other influential Americans and U.S. institutions — was being manipulated by the Russian government to promote its interests.

On Twitter, CNN’s Oliver Darcy called it a “big retraction” and Daily Caller’s Chuck Ross said it is a “big correction.”

It’s a bit farther down in the article where you find what justifies those characterizations. It’s the “despite.”

“Despite the alert, Giuliani went forward in December 2019 with a planned trip to Kyiv, Ukraine’s capital, where he met with a Ukrainian lawmaker who the U.S. government later labeled ‘an active Russian agent’ and sanctioned on grounds he was running an ‘influence campaign’ against Biden,” the original version said.

The corrected version changes the sentence to read “Giuliani traveled in December 2019 to Kyiv, Ukraine’s capital, where he met with a Ukrainian lawmaker whom” etc. The article also explains the background of the change.

On Friday, following the initial publication of this report, Giuliani denied he was contacted by the FBI about Russia’s disinformation campaign. One America News President Charles Herring said Friday the network was never contacted by the FBI “regarding Ukraine or people associated with Ukraine.”

We've deleted an earlier tweet saying the FBI warned Rudolph W. Giuliani that he was the target of a Russian misinformation campaign, which he has since disputed. This story has been corrected.

The New York Times has now also issued a correction on their own story, after first stealth-editing it and getting called out on social media.

Before and after in NYT’s story. The NYT story does not include a retraction or acknowledgment that the reporting on a defensive briefing was removed. https://t.co/EV5N7XXTSk pic.twitter.com/jpdAQ4QLKf

NYT spox on why a correction wasn’t initially included: “We decided to update the story as quickly as possible to stop perpetuating the incorrect information while we reviewed correction language.”