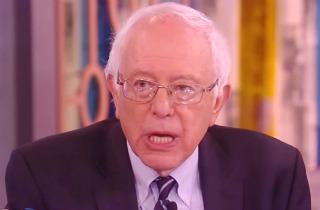 The Washington Post editorial board continued its criticism of Bernie Sanders Friday the day after the Democratic presidential candidate attacked the paper.

On Wednesday, the Post ran an editorial accusing Sanders of running a “fiction-filled campaign.” They argued that Sanders promised a liberal utopia to attract Democrats, but was unable to give clear answers about how he actually intended to pay for or enact his proposals. “Mr. Sanders is not a brave truth-teller,” they wrote. “He is a politician selling his own brand of fiction to a slice of the country that eagerly wants to buy it.”

Sanders hit back later the next day: “People are telling us, whether it’s the Washington Post editorial board or anybody else, our ideas are too ambitious — can’t happen. Too bold, really?”

But WaPo isn’t letting up, writing a second anti-Sanders editorial Friday with a title that echoed his comments: “Bernie Sanders’s ideas are not too bold. They are too facile.”

“What concerns us is not that Mr. Sanders’s program to tackle these issues is ‘radical,’ as he put it, but that it is not very well thought out,” the editors write. “We are far from the only ones, for example, to point out that his health-care plan rests on unbelievable assumptions about how much he could slash health-care costs without affecting the care ordinary Americans receive.”

The paper again called on Sanders to address the reality that under a nationalized health care system, Sanders would need to ration care. “Instead, he promises comprehensive benefits without seriously discussing the inevitable trade-offs. That is not just bold; it is half-baked.”

“He would use higher taxes on Wall Street and the rich to fund vast new programs, such as free college for all, but has no plausible plan for plugging looming deficits as the population ages,” they continue. “His solution to the complex international crises the United States must manage is to hand them off to others — though there is no such cavalry. This might not distinguish him much from other politicians. And that is part of the point: His campaign isn’t so much based on a new vision as on that old tactic known as overpromising.