Rabbi Shmuley Boteach’s full-page ad in the New York Times this weekend accusing National Security Advisor Susan Rice of “turning a blind eye” to genocide is getting its fair share of pushback.

Boteach, a common figure on cable news, attacked Rice for “standing by” during the Rwandan genocide while a member of President Bill Clinton’s foreign policy team in the 90s, and craftily used a quote from now-U.N. Ambassador Samantha Power to make his case. Boteach said Rice was repeating history as she and the Obama administration allow Iran to develop a nuclear program:

Jewish groups were quick to denounce the ad:

Shmuley Boteach's NYT ad was way over the top. Agree or not w/@AmbassadorRice, to accuse her of seeking genocide against Israel is revolting

Boteach ought to look within himself, recognize he made a huge error, and apologize unconditionally to Susan Rice. http://t.co/tVbBCjgJJz

The American Jewish Committee called it “revolting,” the Anti-Defamation League called it “spurious and perverse”, the Jewish Federations of North America called it “outrageous” and Josh Block, the president of The Israel Project, said it was “entirely inappropriate.”

…Also condemning it were the Orthodox Union, J Street, the Jewish Council for Public Affairs and the Rabbinical Assembly of the Conservative movement. In a combined statement, the leaders of the Reform movement’s various arms called it “grotesque,” “abhorrent” and a “sinister slur.”

The Obama administration rejected it as well. “This ad is being widely met with the revulsion that it deserves,” a White House official told CNN. “Frankly, the ad says more about those who supported it than it says about Susan Rice.”

Boteach tweeted in support of the ad on Sunday:

Our organization fights against genocide wherever it takes place. Susan Rice's comments trivializing Rwanda part of the historical record.

We'll continue to call out all who minimize genocide. Susan Rice's comments as reported by Samantha Power about Rwandan genocide deplorable. 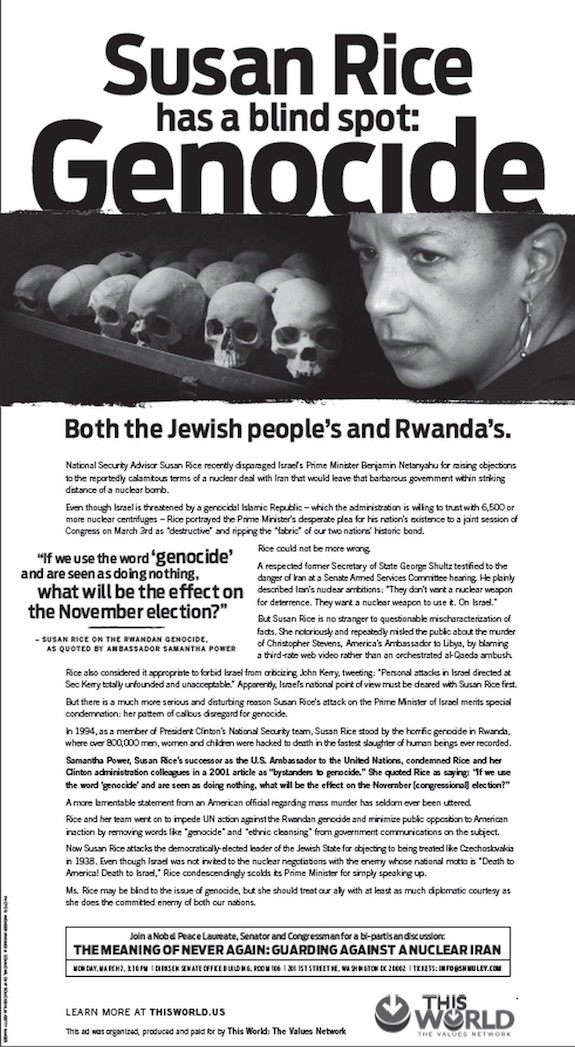