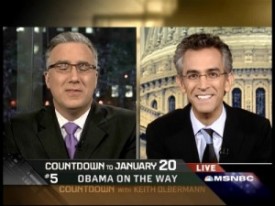 Almost lost in the brouhaha over the reported truce between GE/Keith Olbermann and Fox News/Bill O’Reilly was the news that Olbermann had kicked replacement host Richard Wolffe off of Countdown. Olbermann cited the appearance of a conflict of interest between Wolffe’s consulting job and his duties as a political analyst for MSNBC. But given the landscape of cable news, in which many big name “politicos” consult on the side quietly or not-so-quietly, why was Wolffe singled out?

Wolffe consults for a firm called Public Strategies, Inc.: in his Salon column, Glenn Greenwald made the point that “Wolffe’s role in life is to advance the P.R. interests of the corporations that pay him, including corporations with substantial interests in virtually every political issue that MSNBC and Countdown cover.” Responding on Daily Kos, Olbermann wrote, “What appears to be the truth here is certainly not what Richard told us about his non-news job … until we can clarify what else he is doing, he will not be appearing with us.”

But nearly all of the established political analysts in cable news do exactly the same thing. In fact, many of them would consider themselves consultants first, who then appear on television as a means to a larger end. Should they disclose any conflicts of interest? Absolutely. But it makes little sense that Wolffe would be singled out for so commonplace a practice. Consider these pundits, all paid contributors to the networks:

If we were to hold these commentators as the same standard that took Wolffe off the air, cable news would be dangerously low on punditry. So, why did Richard Wolffe get singled out?