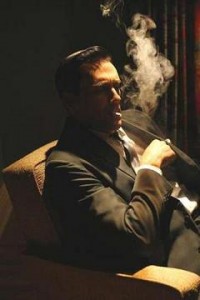 I like Mad Men. A lot. So do many of my friends; so do many of the people that I work with. When Season One and Season Two came out on DVD, I rationed the episodes like candy, savoring every line and impeccable costume. When I discovered Dyna Moe’s superb gallery of Mad Men pop art desktop wallpapers, I chuckled knowingly in my head at captions/in-jokes like “commemorating the scene and outfit that ended Paul’s status as my favorite character” and “Allo! I am the Baron Snagglepuss Von Moustache. My cartoonish friends and I are all visiting for the weekend from a Blake Edwards movie. Care to join us for a drink or maybe a weekend of unsubtle metaphor and blunt symbolism?” In short, I am a Mad Men geek too, so I am cool and you should like me.

I’m not alone: the media is obsessed with Mad Men. Vanity Fair just wrote a monster article on the show; the New York Times has been all over it; in a somewhat confusing headline, even USA Today said that “Distinctive ‘Mad Men’ reaches out to today’s style, culture.” Seeing jokes about Don Draper and photos of January Jones everywhere suits me just fine, but why do I suspect that to a big chunk of the population, the Mad Men hype feels shoved down their throats?The fact is, not all that many people watch Mad Men, which is on AMC. Season Two averaged only 1.52 million viewers a week. Nielsen numbers aren’t yet out for last night’s heavily promoted Season Three premiere, but murmurs are abounding that last night’s True Blood did a lot better. Like many shows with cult followings, Mad Men does comparatively well in DVD sales, but these shouldn’t be overstated. TVbytheNumbers said that Mad Men Season Two’s first week DVD sales of 94,774 was “not a particularly impressive first week total.”

It’s probably a good thing that entertainment coverage isn’t dictated solely by Nielsen ratings, or else you’d see a lot of grudging coverage of Two and a Half Men by people who don’t especially care for it. But when writers so thoroughly cover a show that so many of their readers have never watched, you have to wonder why: why is Mad Men so maddeningly disproportionately written-about?

Well, it’s good, or at least critics think so. The show won six Emmys in 2008 and has been nominated for sixteen more this year; its many other critical awards and nominations have their own Wikipedia page. It’s also zeitgeisty: it taps a cultural nerve that was inaccessible ten or even five years ago. As Frank Rich wrote this weekend:

What makes the show powerful is not nostalgia for an America that few want to bring back — where women were most valued as sex objects or subservient housewives, where blacks were, at best, second-class citizens, and where the hedonistic guzzling of gas and gin went unquestioned. Rather, it’s our identification with an America that, for all its serious differences with our own, shares our growing anxiety about the prospect of cataclysmic change.

But do people, much less media people, ever really fixate on something because it’s abstractly important — or do they look harder for the cultural importance of stuff that already interests them? This gormless Chicago Sun-Times column/fanboy love letter to Don Draper gets it more right than wrong when it chalks up the show’s success to how cool Jon Hamm’s character is. Whatever capital-M Meaning you graft onto the Sixties stylings and anachronistic shock of the show, Mad Men runs on an aesthetic, and it happens to be an aesthetic that many media folk think is groovy.

Is any of this truly bad? Not really. There is, admittedly, an elitist impulse beneath the entertainment critic’s reasoning that one’s own taste and the tastes of one’s fellow critics are a better measure of what’s good and interesting than what people are actually watching. But without that impulse, slow starters like Seinfeld and 30 Rock might have been canceled before they hit their stride.

The media should be honest about what they’re doing: whenever I read an article in a general interest pub that leads off by saying how smashingly popular a phenomenon like Mad Men is, I tend to think that the author is either being flat-out disingenuous or wildly extrapolating from his or her own social circle. And for every Mad Men, there are plenty of comparably good shows with middling ratings that not enough critics seriously explore because they never really land in the echo chamber (Breaking Bad comes to mind). But tastemakers are so called for a reason, and people who have taken it upon themselves to be critics are presumably better judges of writing, acting, genre history, and sexy redheads sashaying about in too-tight dresses.  Elitist critics: as long as you’re upfront about the insideriness of what you’re doing, keep the Snagglepuss Von Moustache jokes coming.