Does Controversial Bloomberg/BusinessWeek Cover Show Media Is Making Romney The ‘Other?’

Does Controversial Bloomberg/BusinessWeek Cover Show Media Is Making Romney The ‘Other?’ 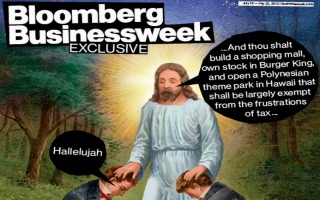 While the cover art of newsmagazines have been trending towards becoming the print equivalent of “click bait” for some time, this upcoming cover may inspire more than its fair share of hand wringing. A mockup for Bloomberg / BusinessWeek’s upcoming cover story on the Church of Latter Day Saints, which depicts Jesus Christ telling two of the Mormon Church’s faithful to aspire to owning stock in Burger King, is flirting with trouble. But will critics who regularly accused President Barack Obama’s opponents of attempting to frame him as the scary “other” due to his heritage say the same of this attempt to influence and inform voters about Republican presidential candidate Mitt Romney’s faith? Don’t hold your breath.

Supporters of President Obama have invoked the complex concept of “otherness” to impugn the motives of the President’s opponents who regularly attempt to breathe new life into his affiliation with the controversial Rev. Jeremiah Wright or highlight his experience as a child growing up in Indonesia.

There is something to be said for these criticisms – though I think they have been gratuitously invoked often enough over the course of Obama’s presidency that their impact is now muted.

But the same criticism could be made of images like these. The investigation by Bloomberg which will highlight the commercial practices of many members of the Mormon church — activities that are supported by the highest ranking members of the LDS — could be considered an attempt to frame the church as “other.”

Many Americans have no contact with members of the LDS church. With just 14 million members, they are certainly a minority group. Average voters may not have fully formed opinions of Mormons or the LDS, and magazine covers like this would frame him in ways that make average Americans uncomfortable. 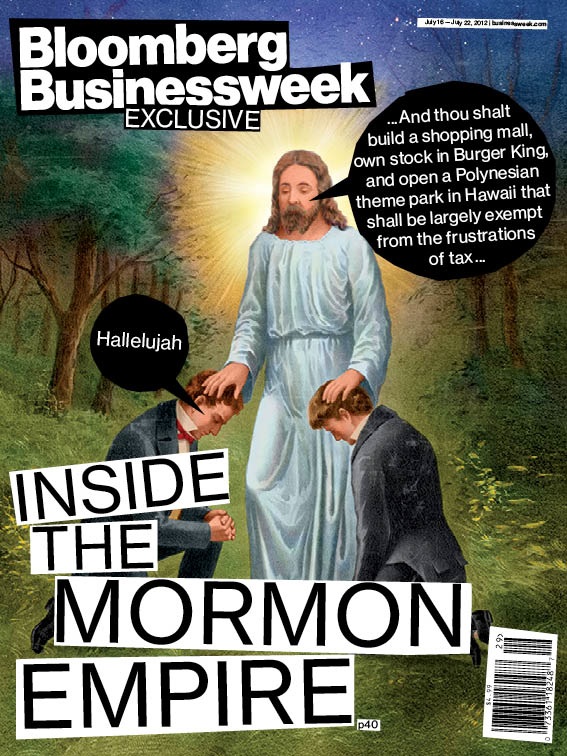 Imagine for a moment a similar newsmagazine cover that took readers “inside Indonesia’s madrassas” with a cartoon image of young students eating charbroiled dog’s legs. That shocking cover art, while couched as hard-hitting journalism, would be immediately seen for what it was – a thinly veiled and offensive portrait of President Obama’s youth.

I personally find this Bloomberg cover rather innocuous. There is nothing wrong with doing some real investigative work into the officially sanctioned practices of the Mormon church, just as I do not find it especially offensive if some enterprising journalist were to take a discerning look at the educational philosophies of the average Indonesian school teacher in the late 1960s. That exposé, though, I doubt very much I will have the pleasure of reading any time soon.

Journalism is to be applauded. Investigative work into the backgrounds of candidates for the office of president is absolutely essential in order to allow voters the ability to make an informed choice. But let’s not pretend that this deep, cultural vetting has been doled out in equal measure.

The President’s supporters who seem so often offended by any criticism of Obama that could be construed as an attack on his heritage would show that they are neutral and deliberative observers of political discourse if they voiced the same revulsion over cover pieces like this one. That they will not (and trust me, they won’t) exposes those moments of convenient outrage for what they were – efforts to silence a thorough investigation into Obama’s background.

If there is nothing wrong with investigating Romney’s faith – and there isn’t – than the same is true of President Obama’s youth. As Romney has inartfully said, “sauce for the goose is sauce for the gander.” Right?