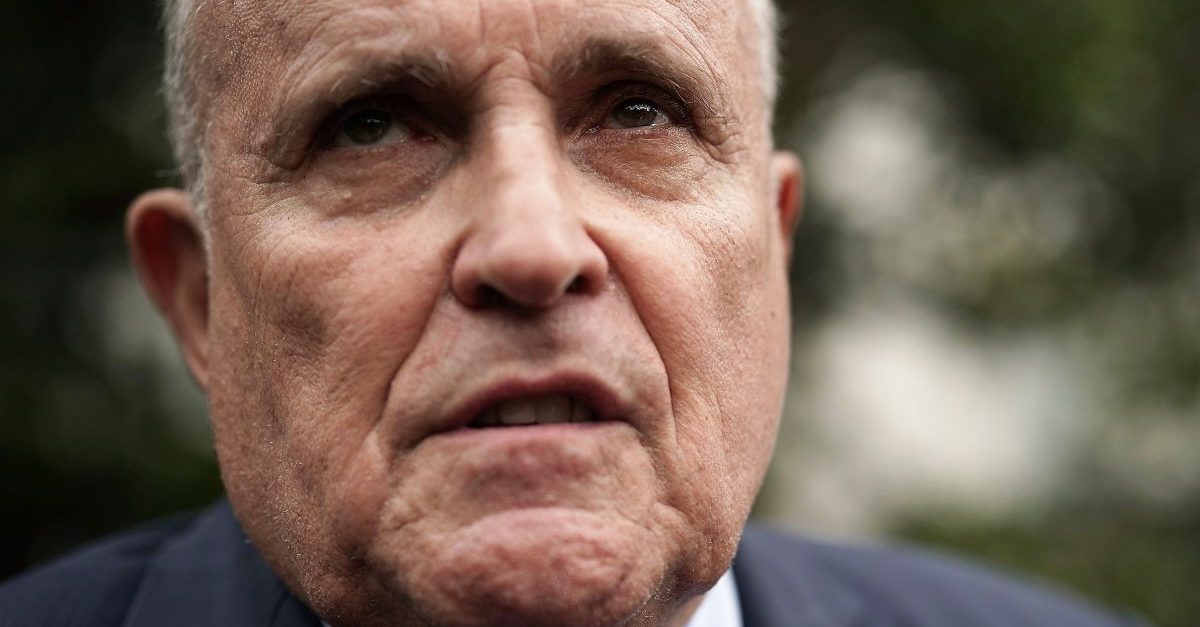 Rudy Giuliani spoke with Brian Kilmeade during a Friday morning radio interview and claimed that President Donald Trump was not aware of the Stormy Daniels hush money payment “at the time,” and only made “arrangements for reimbursement” when he found out later.

At issue is alleged campaign finance crime that has been brought back into public focus after Trump’s former personal attorney Michael Cohen publicly testified before Congress last Wednesday, and introduced two checks in the amount of $35,000 made to Daniels lawyer at the time, on signed by Mr. Trump and the other signed by Allen Weisselberg and Donald Trump Jr.

Kilmeade, who switches to his radio show after hosting the Fox News morning show, Fox & Friends, asked Giuliani about “the whole Stormy Daniels situation and the payments and the checks as exhibit A for $35,000 in a series of payments.” He then added that legal experts have said this is very problematic, particularly as Cohen has claimed that this ostensible payoff was completed in the Oval Office.

Giuliani dismissed this news by saying “there’s nothing new in what he said.” He then explained that he and Trump’s legal team “brought out ten months ago about that he made the payments,” before adding “it’s our view of it that the President didn’t know about it at the time. And then the President when he found out about it made arrangements for reimbursement.”

Some believe that this claim runs counter the narrative presented by audiotapes that were secretly recorded by Michael Cohen which appear to be a discussion between Trump and Cohen discussing the specifics of the payoff, however, those audiotapes revealed discussion about a separate payoff scheme that involved another alleged secret paramour with whom Mr. Trump had an affair, former Playboy Playmate Karen MacDougal.

Cohen, in his sworn testimony before the House this week, said that Trump instructed him to make the Stormy Daniels payment and followed up on its progress. For a full analysis on evidence suggesting Trump knew, read the curiously named Philip Bump’s thoughtful analysis in the The Washington Post.

The transcript of the relevant portion of the interview is below:

KILMEADE: So, with the whole Stormy Daniels situation and the payments and the checks as exhibit A for $35,000 in a series of payments. Legal experts have said this is very problematic because he was the one receiving the checks and Donald Trump did sign at least one of them.

GIULIANI: Well you know it really isn’t because they don’t have any sense of history. Look, we brought all that out ten months ago, there’s nothing new in what he said. We brought out ten months ago about that he made the payments, it’s our view of it that the President didn’t know about it at the time. And then the President when he found out about it made arrangements for reimbursement. Now, it’s not a campaign contribution Brian because one of the purposes of it was the shield Melania, his wife and his family, from the bad publicity. And he himself acknowledged that twice when he said the hardest thing was when he had to go lie to Melania. So, you can go back to girly(ph) explanations on a tape of which there are many, he said he made those payments primarily for a personal purpose. So, if you go back to some of the other cases that exist, if I make a so called “campaign expense,” one of the reasons for it is personal and I would have made it anyway had I not been in a campaign and it’s not a campaign contribution. That’s clear, so the southern district is pursuing a faulty theory with regard to Cohen but he plead guilty to it, never tested. I really doubt they’re going to use a questionable theory to pursue other people.