Stephen A Smith Hurt by Knicks Missing Out on Kevin Durant

Knicks Fans Devastated After Missing Out on Star Free Agents–But None More Than Stephen A. Smith 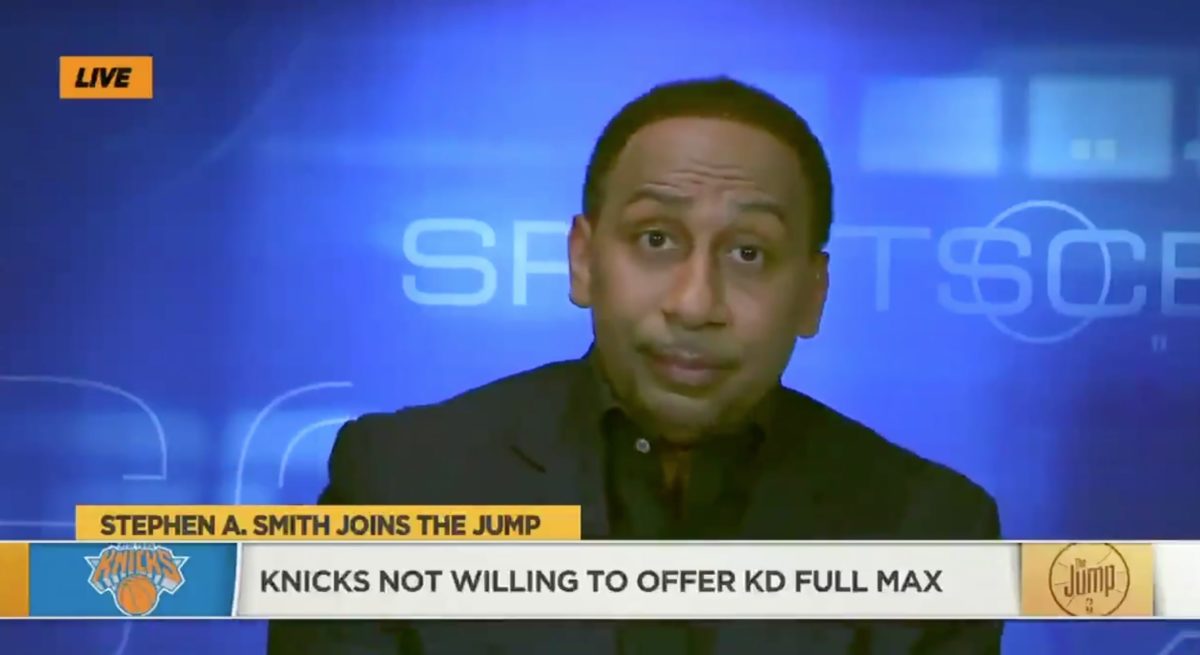 Fans of the New York Knicks had a tough Sunday night–somewhat of an understatement as the team apparently missed out on the chance to sign star Kevin Durant and other top players.

To add insult to injury, multiple star free agents like Durant and Kyrie Irving were locked up by the New York Nets. The Nets play just a borough over from the Knicks in New York City.

To add further insult to injury was the implication that the Knicks could have signed Durant if not for team owner James Dolan’s concern over an injury that led them to not offer a max contract.

The Knicks and owner Jim Dolan were not prepared to offer Kevin Durant a full max contract due to concerns over his recovery from the Achilles injury, league sources tell me and @wojespn. Knicks officials are in Los Angeles tonight, meeting with free agents such as Julius Randle.

Perhaps no one was as unhappy as commentator Stephen A. Smith, who took to both television and his personal Twitter to express his frustration.

“I’m done with them right now!”@stephenasmith is NOT happy with the Knicks’ free agency decisions. pic.twitter.com/n530DuOf6w

“I just finished crying!” Smith said in a tweet.

Fans, critics and commentators across Twitter also had plenty to say.

This day can be seen as nothing less than a total indictment of the New York #Knicks. With every imaginable advantage they have failed at each turn and have now been totally one upped and humiliated within their own city limits.

Can’t have the Knicks break your heart when you’re already dead inside pic.twitter.com/AGc3VCDNvf

Whoever has that Knicks voodoo doll, please put it down now. Enough is enough.

I know there have been a lot of low points for the Knicks. But this is the lowest.

Knicks fans deserve better than this. It’s one thing to be terrible for decades. It’s another to get their hopes up about Kyrie and KD and then have them come to NYC, but to the other team.

The Knicks figuring out new ways to lose. pic.twitter.com/100zmpiDbi

As a Knicks fan I humbly request that no one talk about basketball ever again in any context, thanks.