People Are Losing it Over Tom Brady’s Super Villain Outfit: Looks Like a ‘Overconfident European Assassin’

People Are Losing it Over Tom Brady’s Super Villain Outfit: Looks Like a ‘Overconfident European Assassin’ 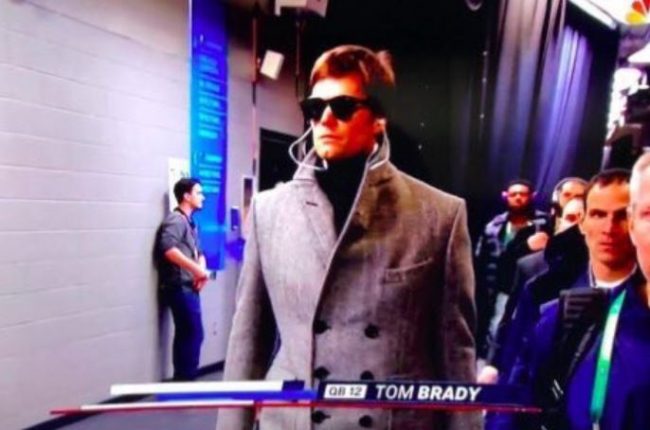 As New England Patriots quarterback Tom Brady walked into his eighth Super Bowl appearance today, he arrived at U.S. Bank Stadium in freezing Minneapolis, Minnesota wearing large, blacked-out sunglasses and a trench coat — a look that many fans compared to a super villain.

Brady and Patriots are the favorites as they face the Philadelphia Eagles in Super Bowl LII. Despite the odds being in favor of the Patriots, Brady still showed up to the game looking as intimidating as possible.

While Brady is notorious for his fashionable lifestyle, the dramatic bad-guy look was so over-the-top that it inspired countless memes on social media:

brady looks like the overconfident european assassin who dies in the last twenty minutes of an action movie pic.twitter.com/dXvX47xtxS

Philly fans should appreciate how much Brady seems to be channeling Ivan Drago here. https://t.co/Fxhxz4Ff2A

i can’t be the only one who sees this pic.twitter.com/Yrsr2c7XC3

the fake melania was in fact tom brady in a wig: a conspiracy theory pic.twitter.com/uckyQXD8PW

when you’re really into touchdowns and killing Reed Richards pic.twitter.com/Wu3fqP8GDf

“No, Mr. Eagle. I expect you to *die*.” pic.twitter.com/BcvNMscVoJ

Tom Brady looks like he moved to Berlin to kick a cocaine habit and work with Brian Eno pic.twitter.com/xI5lkrAMW8