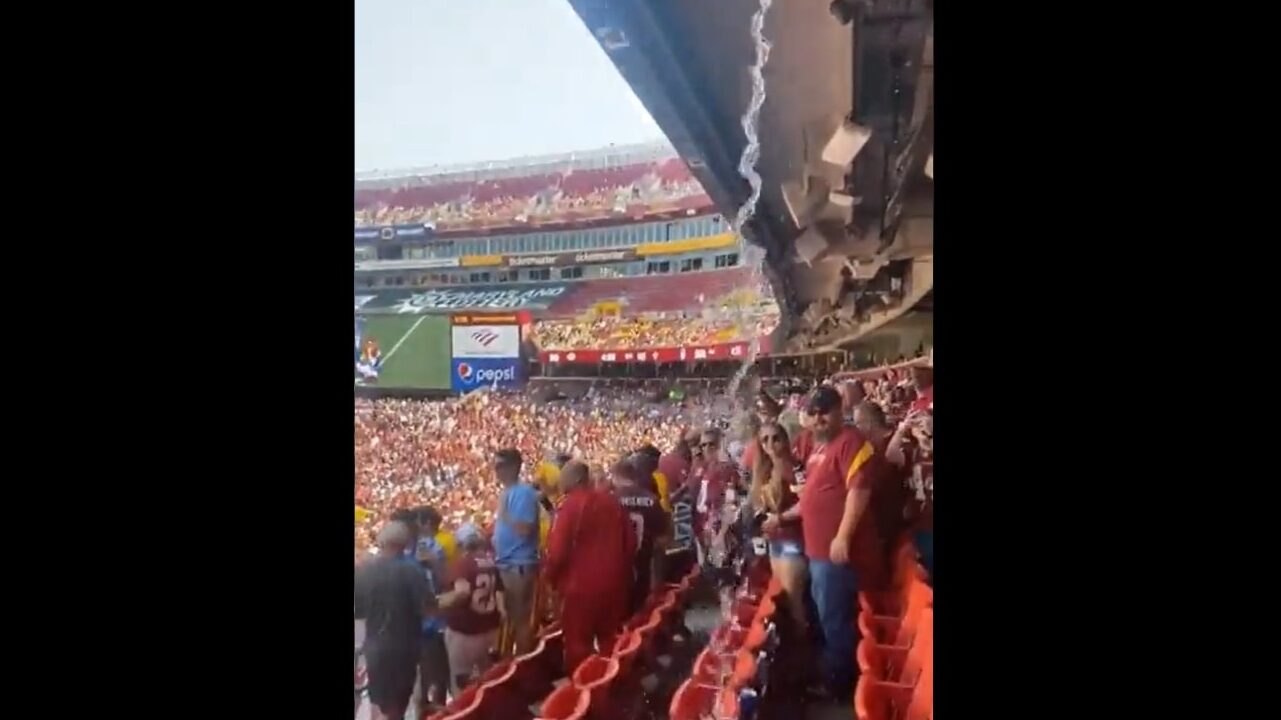 Not much went right during Washington’s season opener against the Los Angeles Chargers, beginning with their starting quarterback Ryan Fitzpatrick leaving the game with a hip injury. But the franchise’s recent woes might have been best described when a stadium pipe burst, raining what fans believed to be sewage on their heads.

The Washington Football Team has been the butt of many jokes in recent years, a franchise that routinely gets stuck in controversy, usually by their own doing. Fans of the once proud franchise have grown used to losing, despite last season’s playoff appearance after they were pushed to the top of an awful division. But sewage raining from above would be a new low for any fan base.

Not something you see every day: a sewage pipe burst at FedEx Field. 😅 pic.twitter.com/d1CWlGRj9i

A WFT spokesperson later told ESPN it was not sewage, it was just rainwater.

“The leak came from a storage tank filled with rainwater. We gave the fans in the section the option to move to a suite for the rest of the game, and we’re going to give them tickets to a game of their choice in the future. They were also given Washington Football Team gear,” the franchise said.

Quick update:
1. It was rain water
2. It has stopped
3. The fans are in suites enjoying the game

All water under the bridge 😉 pic.twitter.com/kB2Jcr2q4g

Not quite a quarter-century old, FedEx Field opened in 1997, replacing Robert F. Kennedy Memorial Stadium, which was located in DC and served as a multi-sport venue.

Earlier this year, WFT owner Daniel Snyder shared his expectations of having a new “state of the art” stadium built by 2027. FedEx Field is located in Landover, MD, northeast of DC. Snyder has said he’s looking to build in DC, Maryland or Virginia.

Even though the team debunked theories of their stadium being in such disarray that poop was falling from the sky, social media enjoyed running with the opportunity to make sh*tty jokes.

They shouldn’t have changed their name. https://t.co/jQQg9eJI7X

What is it like living in the nation’s capital, you ask? https://t.co/lOtlycgd3P

Computer: show me a metaphor for America & infrastructure https://t.co/7evnNuLeNP

So it’s a literal shit show in Washington. I’ll show myself out https://t.co/9CcUDH3kBJ

nice of the Washington Football Team to involve their fans by letting them catch a dump pass https://t.co/xgu5cfdkeK