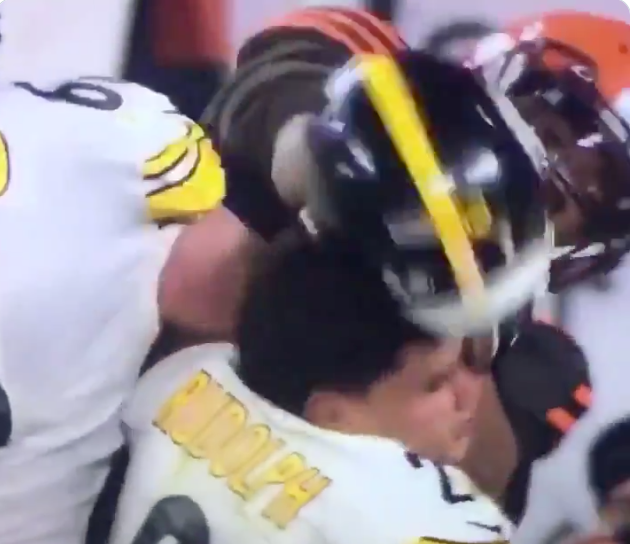 ESPN is reporting that Myles Garrett alleged that Pittsburgh Steeler Quarterback Mason Rudolph called him a racial slur during an appeal to the indefinite suspension he received from the NFL after Garrett’s attacking of Rudolph with his helmet.

During a Thursday night NFL game, last week, Garrett ripped the QB’s helmet off his head during an altercation after a play and then using it as a weapon to slam against Rudolph’s bare head.

But in a new twist, Garrett is claiming there is more to the story.

“Mason vehemently denies the report of being accused of using a racial slur during the incident Thursday night in Cleveland,” Steelers spokesman Burt Lauten said in a statement. “He will not discuss this accusation any further and his focus remains on preparation for Sunday’s game against the Cincinnati Bengals.”

On Wednesday, Rudolph told reporters he didn’t say anything to provoke Garrett or escalate the situation.

Contacted after the allegations were reported, Rudolph’s attorney Timothy M. Younger said: “According to ESPN, in his appeal, Myles Garrett falsely asserted that Mason Rudolph uttered a racial slur toward him, prior to swinging a helmet at Mason’s uncovered head, in a desperate attempt to mitigate his suspension. This is a lie. This false allegation was never asserted by Garrett in the aftermath of the game, never suggested prior to the hearing, and conspicuously absent in the apology published by the Browns and adopted by Garrett.

The Cleveland Browns defensive end was suspended for the rest of the season following his violent helmet attack against Pittsburgh Steelers quarterback last week. According to a statement distributed by the NFL’s Senior Vice President of Football & International Communications, Michael Signora, Garrett has “been suspended without pay indefinitely – at a minimum for the remainder of the regular season and postseason – and must meet with the commissioner’s office prior to a decision on his reinstatement.”

The NFL is just getting over a highly racialized controversy surrounding the protest of racial-based inequity seen by many players who peacefully protested by kneeling during the national anthem. The politicization of these protests — led primarily by President Donald Trump — had become an effective wedge issue for those placing patriotic traditions over the peaceful protests.

While this episode will almost certainly not rise to the National Anthem kneeling dust-up, it is certainly not a welcome development for the NFL.