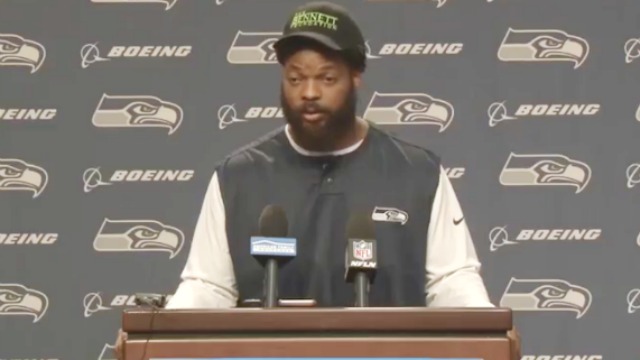 As the NFL’s season officially kicks-off in just over 24 hours, a star player reporting an incident of police brutality is heating up an already politically embattled league.

The NFL player posted a letter on Twitter describing an alleged incident in which two police officers muscled him to the floor and threatened to “blow [his] head off.” The encounter took place during chaos in the street that ensued after the Mayweather vs. McGregor fight.

“The Officers’ excessive use of force was unbearable. I felt helpless as I lay there on the ground handcuffed facing the real-life threat of being killed. All I could think of was “I’m going to die for no other reason than I am black and my skin color is somehow a threat,” wrote Bennett.

The Las Vegas police department responded to Bennett, saying the investigation is on-going and asking Americans to reserve their judgement.

Reference a statement made by Michael Bennett, this case is under investigation. Reserve judgment. We will address this publicly today.

The Seahawks star’s accusation toward officers sparked many on Twitter to debate the issue of excessive police force and its relation to the NFL — Kaepernick himself even chimed in:

This violation that happened against my Brother Michael Bennett is disgusting and unjust. I stand with Michael and I stand with the people. pic.twitter.com/TqXFiso6lk

Shut the fuck up forever if you think Michael Bennett did anything wrong. So quick to defend headass cops. It’s disgusting.

Vital that Michael Bennett, in alleging abuse, noted that celeb status helped free him. Poor, anonymous black guy might still be in custody.

Lot of black athletes have had ugly run ins with police. We don’t hear about them because it’s scary to go public. @mosesbread72 is brave.

Damn, I wish there was a way @mosesbread72 could peacefully demonstrate against unequal treatment in America in front of a gigantic audience https://t.co/AVpRSnhizd

Michael Bennett was black man running from danger, in cops minds 1000000% that makes him a suspect over any other person in world.

Solidarity and support to Michael Bennett. Another day in America. It’s all so familiar but it doesn’t have to be acceptable.