Colts Fans Rain Boos Down on QB Andrew Luck After His Surprise Retirement
Angry, Out of Luck Fans 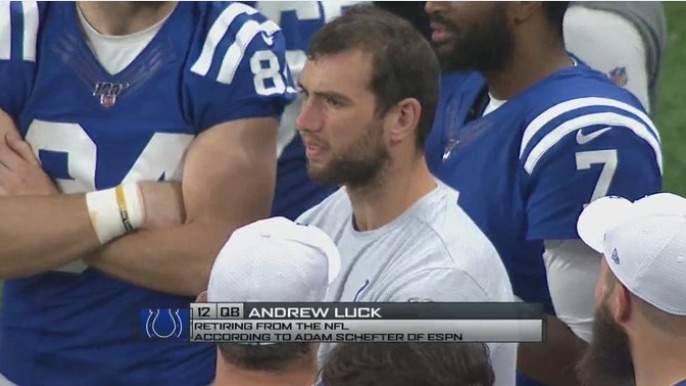 Angry Indianapolis Colts fans rained boos down on QB Andrew Luck as he walked off the field after a Colts-Bears preseason game, after it was revealed on air that the oft-injured Luck would be retiring from the NFL effective immediately.

Luck had not suited up for the tune-up game and instead stood on the sidelines dressed in workout gear. When he headed toward the locker room upon completion of the game, many Colts fans who had gotten word of his retirement expressed their displeasure.

Following the game, Luck held an emotional press conference where he at times fought back tears. But after being plagued by injuries and rehabilitation for the past several seasons, he said he was “unable to pour my heart and soul into this position. … It’s sad, but I also have a lot of clarity in this.”

“I know that I am unable to pour my heart and soul into this position. … it’s sad, but I also have a lot of clarity in this.”

Andrew Luck speaks on his retirement from the NFL. (via @rtv6) pic.twitter.com/cs5HAOQT2G

The long-time Colts quarterback also addressed his not-so friendly send-off from fans just minutes before: “I’d be lying if I said I didn’t hear it. It hurt.”