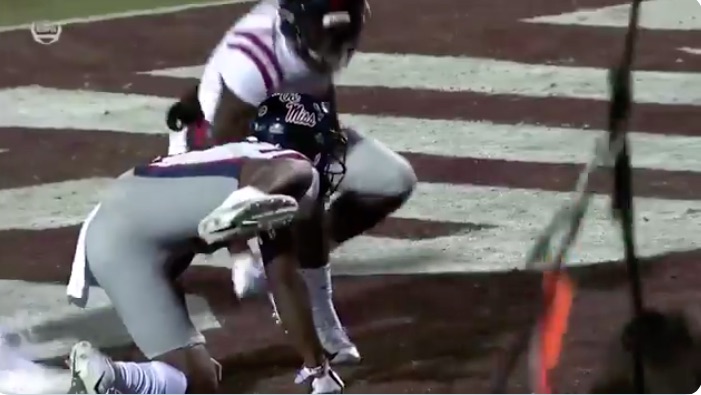 In a rollercoaster ending to the annual Egg Bowl rivalry between Ole Miss and Mississippi State, a last-second score by Rebels’ WR Elijah Moore that looked like it would send the game to overtime ended up costing his team the game when he drew a 15-yard unsportsmanlike penalty for a TD celebration where he pretended to pee like a dog in the end zone.

With just four seconds left in the fourth quarter, Moore had caught a short pass near the goal line and plowed through a Bulldogs defender to score, cutting Mississippi State’s lead to one, 21-20. But Moore then scrambled around the end zone on all fours in celebration and subsequently lifted his leg to simulate a dog urinating, which instantly drew the referee’s flag.

This Egg Bowl ending was INSANE ?

Ole Miss scored with 4 seconds left and had a chance to tie the game with the PAT.

After a flag for the excessive celebration moved the PAT back, the kicker missed wide right and Mississippi State held on to win the Egg Bowl 21-20. pic.twitter.com/z4U7c8JukQ

After the game, Ole Miss coach Matt Luke said he was “disappointed that it happened” but went easy on his star receiver, Moore. “That’s not who he is,” Luke said. “Elijah’s a good kid. He just got caught up in the moment.”