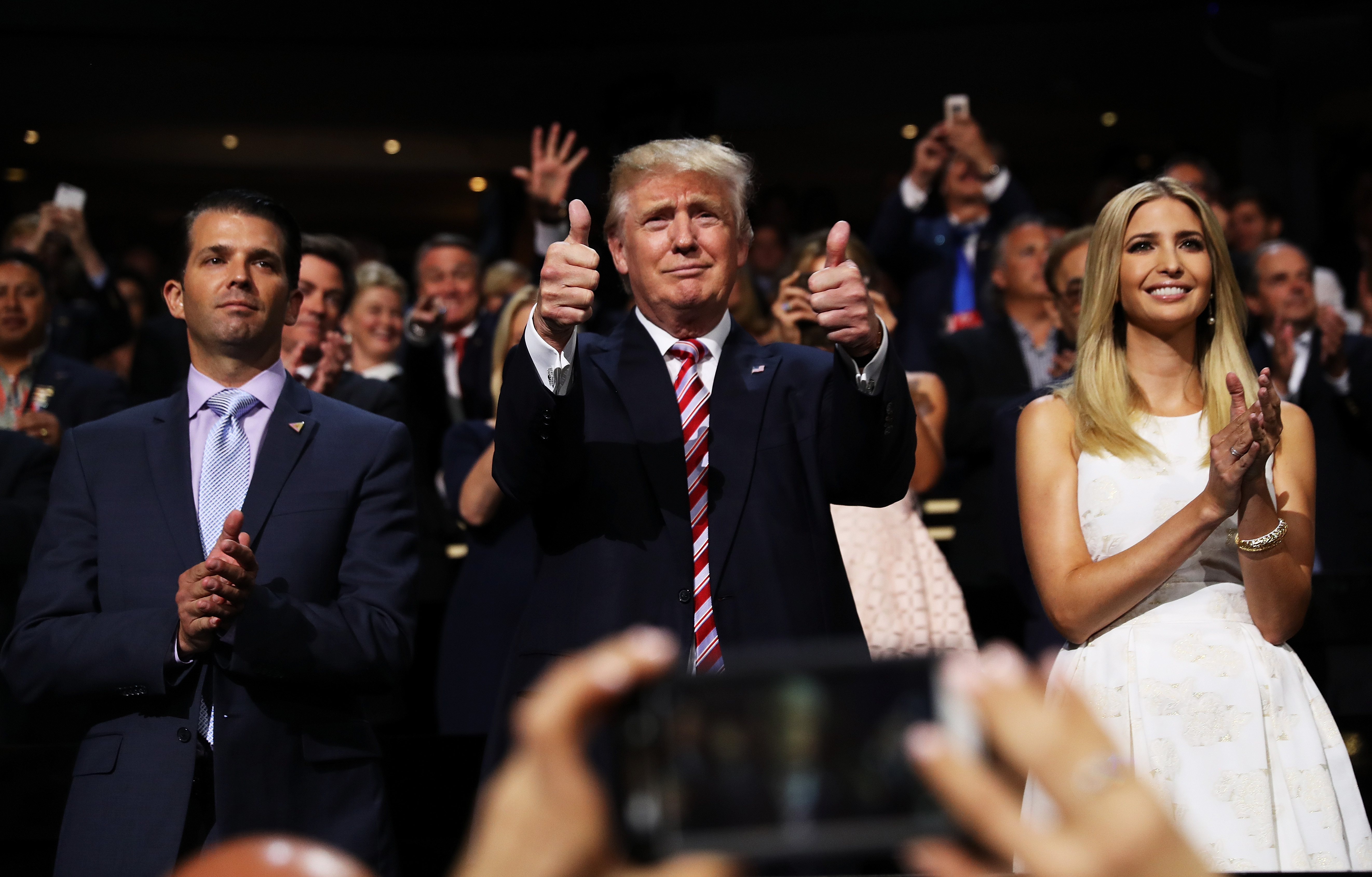 There’s an epic new piece in The Atlantic on the making of the Trump dynasty — from Friedrich Trump, brothel baron, to Fred Trump, New York outer-borough real estate developer, to Donald Trump, president, to two children vying to be the next heir: Don Jr. and Ivanka.

The deeply reported cover story — from Atlantic writer McKay Coppins — details the divergent paths of the president’s adult children, from their roles in his campaign — the scramble to write him a victory speech on election night (“No one had bothered to write one, because Trump wasn’t supposed to win,” Coppins reports) — to positions within and outside of the current administration.

While Don Jr. stuck with the family business, remaining in New York as EVP of the Trump Organization, Ivanka and husband Jared Kushner joined her father in Washington D.C., where they sought to mould themselves as power players in the new administration. Coppins reports that Ivanka has a masterful command of her father, but his opinion of her and Jared’s role in the White House, as they attempted to rein him in, has soured over time.

Don Jr., meanwhile, hasn’t exactly stayed out of politics. You’d know that if you have Twitter, where an endless stream of “lib owning” spurts out from the account @DonaldJTrumpJr. According to Coppins, Don Jr. was dissatisfied with his life trapped in the glass walls of Trump Tower.

“Sequestered in Trump Tower, Don spent the first year of his father’s presidency as a kind of armchair pundit, watching the news on TV and firing off tweets. He showed little interest in running the Trump Organization with Eric and longed instead for the political arena,” Coppins writes. That his father chose Ivanka and her husband Jared to join him in the White House, Coppins adds, has been a source of disappointment for his eldest son. Ivanka’s team pushed back on some of the reporting in the piece, while Don Jr.’s press strategist Andrew Surabian issued a lengthy statement on Twitter that was not included in the piece.

The cover story is packed with explosive reporting and juicy palace intrigue. Here are the wildest moments:

1. Ivanka, as part of her effort to shape the Trump family legacy, pissed off her father

When Ivanka Trump arrived in Washington, Coppins reports, she sought to form a presidential agenda that “her former Manhattan neighbors would approve of.” She had some success early on in reining in her father’s more controversial instincts, like when she successfully neutered an an executive order aimed at protecting religious conservatives that she considered anti-LGBTQ.

“But as time went on, Trump began to tire of Ivanka and Jared’s incessant lobbying,” Coppins writes:

Every time he turned around, they were nagging him about something new—refugees one day, education the next. It never stopped. Their efforts to change his mind about the Paris climate accord exasperated the president, who took to mocking their arguments when they weren’t around. “They’re New York liberals,” he would say, according to a former White House aide. “Of course that’s what they think.”

2. Trump erupted over Jared’s use of a private email server, called him stupid, lamented that Ivanka hadn’t married Tom Brady and wished that Javanka would just move back to New York

Remember Hillary Clinton’s private email server? The scandal that Trump and his allies wielded as a truncheon during the 2016 presidential campaign? Well, earlier this year it was revealed Jared and Ivanka had used personal email accounts to conduct government business.

Per Coppins, that “prompted a presidential meltdown in the Oval Office.”

“How could he be so stupid?” Trump raged, according to a White House official who spoke about the episode to The Atlantic. “That’s what Hillary did!”

That anecdote is followed by this brutal bit of reporting:

Trump reportedly began telling allies, “Jared hasn’t been so good for me,” and lamenting—in jest, perhaps, though no one could say for sure—that Ivanka could have married Tom Brady instead. More than once, the president wished aloud that the couple would move back to New York.

Much of the piece is dedicated to outlining the intense rivalry between Jared Kushner — who earned the president’s respect as a close adviser in Washington — and Don Jr., who despite political aspirations was trapped in New York.

After the 2016 Trump Tower meeting was made public — which propelled the Russia probe into a nightmare for Trump — Jared released a lengthy statement “effectively blaming the radioactive meeting on his brother-in-law while absolving himself,” Coppins writes.

That statement — which included a brutal email revealing Jared sought an excuse to skip Don Jr.’s meeting — “infuriated” the president’s son. It also convinced Trump who screwed the pooch on the fiasco.

Watching cable-news coverage of the fiasco from the West Wing, Trump shook his head wearily. “He wasn’t angry at Don,” a former White House official recalled. “It was more like he was resigned to his son’s idiocy.”

“He’s not the sharpest knife in the drawer,” Trump said with a sigh.

There’s a famous photo that went viral at the beginning of Trump’s presidency, showing Jared Kushner, in Iraq, sporting the preppiest of preppy looks under his flak jacket.

Coppins reports that prompted iMessage mockery between Don Jr. and his friends:

When photos were released of Jared in Iraq in the spring of 2017, sporting a flak jacket over his oxford shirt and blazer, Don spent the afternoon trading gleeful text messages with friends about the Martha’s Vineyard–meets–Mosul getup.

But beneath all Don’s carping was a more personal grievance: While Jared and Ivanka moved freely through the West Wing, he was stuck on the outside, his face pressed up against the glass.

5. Trump disapproved of Don Jr.’s relationship with Kimberly Guilfoyle because…

According to Coppins, Trump was NOT “enthusiastic” when his son started dating Kimberly Guilfoyle, then a Fox News host. Her attendance at a White House Fourth of July party “sparked a round of fawning press coverage—upstaging Jared and Ivanka,” which apparently rankled aides. “And as Thanksgiving approached, the president made it known that Guilfoyle wasn’t welcome to join the family at Mar-a-Lago,” two sources told Coppins.

There’s also a disturbing suggestion in The Atlantic piece, sourced from a “longtime Trump adviser,” that the president disapproved of his son’s relationship because he has long had the hots for Kimberly:

Some suspected that the president was simply fed up with the distraction the relationship posed. But according to one longtime Trump adviser, there may have been another reason for his displeasure. Over the years, Trump had frequently made suggestive comments about Guilfoyle’s attractiveness, the adviser told me, and more than once inquired about whom she was dating.

Nonetheless, as Coppins notes, Donberly have emerged as a hit on the campaign trail:

But while Trump may have been less than thrilled about the relationship, among rank-and-file right-wingers “Donberly”—as the couple nicknamed themselves—was a hit. Appearing side by side at Republican rallies, they bantered about each other’s pet names—she was “Pooh Bear,” he was “Junior Mint”—and railed against Democrats. They went on hunting trips and posted selfies with rifles on social media. Fans on Twitter began referring to Guilfoyle as the “future first lady,” and she made little effort to tamp down the speculation.

6. This all started with a few brothels

“The empire begins with a brothel,” Coppins writes to kick off his piece. To the surprise of Mediaite’s staff, it actually did! Friedrich Trump, the president’s grandfather, amassed the first kernel of the Trump fortune by running restaurants and brothels during the gold-rush in northwest British Columbia.

While this isn’t breaking news — those who have read Gwenda Blair’s biography The Trumps: Three Generations That Built an Empire will be well-acquainted with Friedrich’s career in the Yukon, which earned him enough money to launch the Trump dynasty in New York’s outer boroughs by the time of his death at 49 — it’s nonetheless stunning. Fred Trump took the dynasty from the outer-boroughs to Manhattan, and Donald Trump took it to NBC and then the White House.