James Comey Thinks Trump Should Be in Jail, and be Pardoned
ALL the Takes?

James Comey ‘Obviously’ Thinks Trump Belongs in Jail, But Counsels Against Prosecuting Him and Even Suggests a Pardon 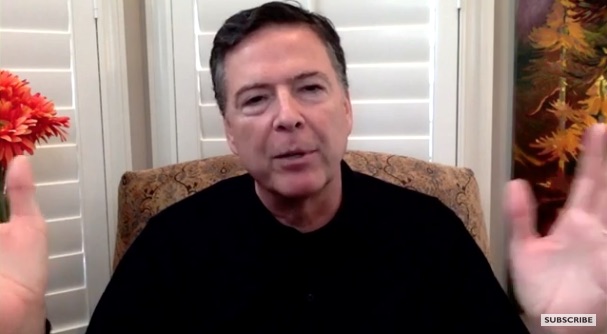 Former FBI Director James Comey offered up a plethora of takes about the future of President Donald Trump, some of which seemed to clearly contradict each other.

During a Wednesday evening interview with host Emily Maitlis of BBC’s Newsnight, Comey made the case that the best way forward for the country was to try to minimize the extent to which the federal government focuses its energy on the now-twice impeached president.

When Maitlis asked what precedent it sets if Trump is given a pass for his misconduct just because his term is ending, Comey wound his way through a response of byzantine logic.

“I know it’s an odd thing to say given my career and given that the guy has been saying I should be in jail in the last four years,” Comey said, before expounding. “But I’m trying to make a judgment about what’s best for the country. I obviously think he belongs in jail, but I don’t think pursuing that is in the best interest of the entire nation.”

“Do you think Joe Biden should pardon Trump as Ford did Nixon?” Maitlis followed up.

“I don’t know, he should consider it,” Comey replied. “Now, I don’t know if Donald Trump — he’s not a genius, but he might figure out if he accepts a pardon, that’s an admission of guilt, the United States Supreme Court has said, so I don’t know that he would accept a pardon. But, as part of healing the country and getting us to place where he can focus on things that are going to matter over the next four years, I think Joe Biden’s at least going to have to think about that.”

The relevant portion of the interview begins at the 5:25 mark.

Watch the video above, via the BBC.