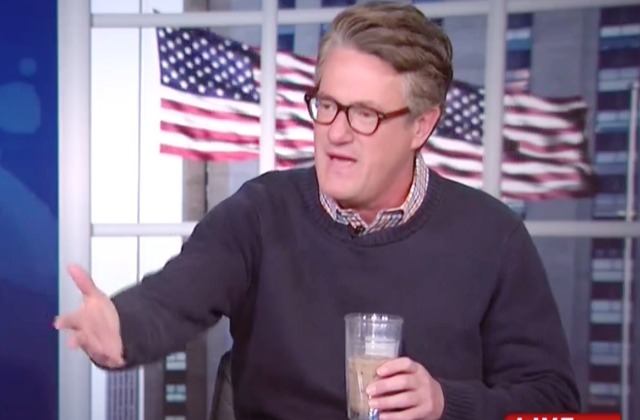 President Donald Trump had his finger superglued to Twitter this morning, retweeting Islamophobic videos, commenting on Matt Lauer (while ignoring his own alleged transgressions) and, oh yeah, apparently insinuating Joe Scarborough murdered an intern in 2001.

Lori Klausutis, 28, was found dead in Scarborough’s office while he served as a Republican congressman in Florida. A report by the medical examiner’s office showed “no foul play” was involved in her death, which didn’t stop Trump dredging up a decades-old conspiracy theory Scarborough had something to do with it, commanding NBC to “investigate” the incident.

The Internet reacted to Trump’s accusation with shock and outrage, most notably Scarborough himself, who said the president “is not well.”

One person, however, really took Trump to task for his irresponsible tweeting: George Scarborough. The MSNBC anchor’s brother was a long-time supporter of the president, but said on Twitter that accusing Joe of murder was, finally, a bridge too far.

Outrageous reference re @JoeNBC where @potus @realDonaldTrump just crossed the line with me. I need to see a public apology to my brother Joe or else he has lost my support for good … which is saying a ton given all the support I’ve shown him in past 2 years. https://t.co/3lXfBPnaTV

George Scarborough, who is not involved in the media world, said that Trump’s tweet put a “huge emotional drain” on his family.

Yes. A bold lie by @potus referring to @ #FakeNews report about my brother fro 20+ years ago that has put a huge emotional drain on my family, & particularly @JoeNBC , crossed the line “Big Time.” https://t.co/gjbQNnAOFo

Of course, once George Scarborough decided to oppose the president, in defense of his brother, he became the target of Twitter trolls and MAGA-heads.

Defend your brother & all the loose cannons on Twitter become unglued. Amazing the impact a simple tweet to only 3,800 followers can get. ? https://t.co/GPxk8Cgsed

He even went as far as to call it “Hate Day” on Twitter.

Scarborough continued to defend his brother against the MAGA masses, calling some of them “idiots.”

No on is deserving of lies being told about them in the public domain where idiots believe everything they see on social media. https://t.co/DwsZhBkm0a

He went on to also tout his Republican bona-fides, as defending his brother apparently made him a RINO in the eyes of many on the far-right.

For all the Haters blasting me for defending my brother from @realDonaldTrump now, I KNOW this is #FakeNews, & apologies for being an R & liking SCOTUS pick, booming stock mkt , 3%+ GDP growth, low unemployment, & other policies, still @potus went too far w/me w/tweet . Done.

The anchor’s brother directly confronted Trump followers who think that there is any truth to the ridiculous allegations, which, again, accuse Joe Scarborough of quite literally murdering a female intern.

Scarborough ended his tweetstorm by noting that “hundreds” of people have “tweeted angrily and viciously” at him.

I’ve said enough about this already…no need to further stimulate the hundreds who’ve tweeted angrily & viciously at me this am for defending my brother @joe NBC against @POTUS promoting this huge lie. https://t.co/IrvBiYgUqo

In this dark and uncertain world, it’s good to know that the Scarborough brothers have one another’s backs. ScarBros for life!