‘Stop the Insanity!’ NY Post Implores Trump to ‘End the Dark Charade’ of ‘Cheering for an Undemocratic Coup’ 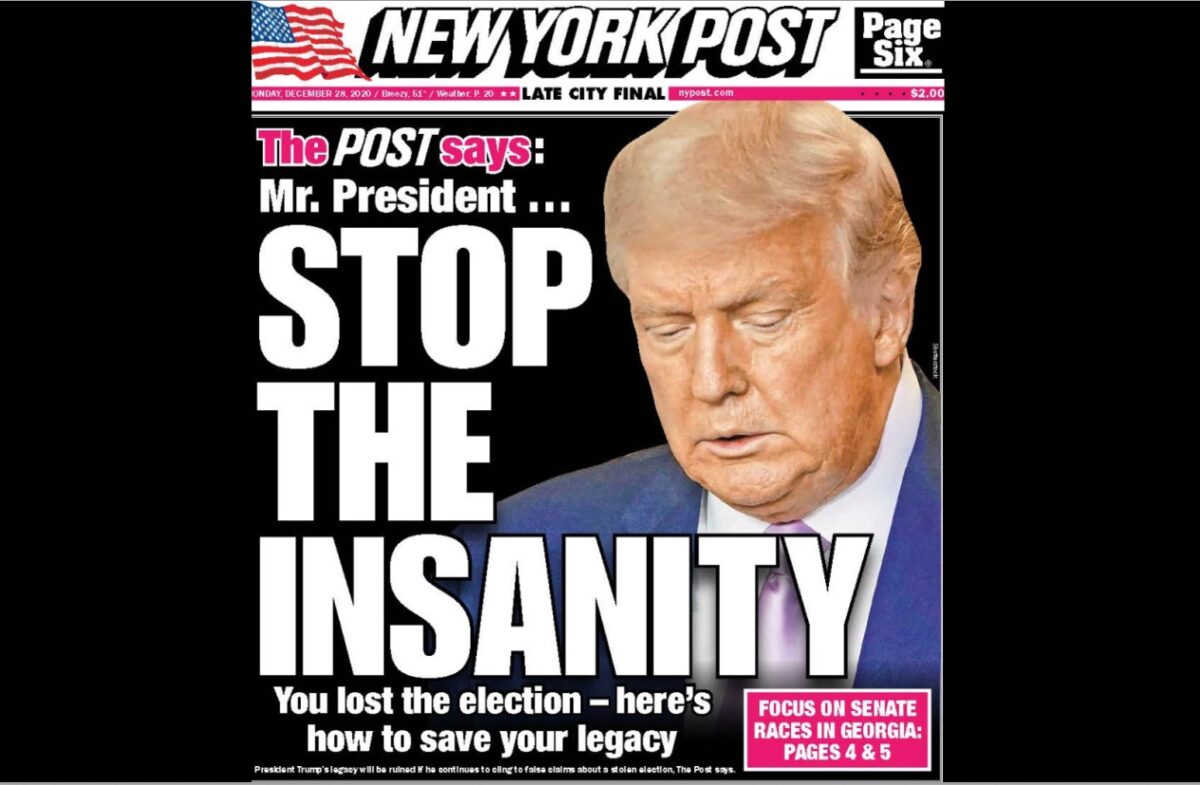 The New York Post is beseeching President Donald Trump to accept that he’s lost the election in a front-page editorial that flatly states the Commander in Chief should give up the “dark charade” of cheering for an “undemocratic coup” and instead focus on how he can save his legacy.

Written by the NY Post Editorial Board, the opinion piece opens with “Mr. President, it’s time to end this dark charade,” before reminding its intended reader that “We’re one week away from an enormously important moment for the next four years of our country.” referencing the Georgia Senate run-off elections on January 5th. ”

“You have tweeted that, as long as Republicans have ‘courage,’ they can overturn the results and give you four more years in office,” it continues. “In other words, you’re cheering for an undemocratic coup.” The opinion piece continues to dismiss Trump’s most ardent advisors to support the overturning of an election that he lost:

Sidney Powell is a crazy person. Michael Flynn suggesting martial law is tantamount to treason. It is shameful.

We understand, Mr. President, that you’re angry that you lost. But to continue down this road is ruinous. We offer this as a newspaper that endorsed you, that supported you: If you want to cement your influence, even set the stage for a future return, you must channel your fury into something more productive.

President Trump has recently become focused on the January 6th date in which U.S. Congress certifies the Electoral College results. Reports have surfaced that his ire has been focused on his Chief of Staff Mark Meadows and Vice President Mike Pence, the latter of which will preside over the congressional certification that will formalize President-elect Joe Biden’s election.

On Sunday evening, just before signing a Covid relief bill that he had previously threatened to send back to Congress, Trump tweeted a tease to January 6th, telling his followers, “See you in Washington, DC, on January 6th. Don’t miss it. Information to follow!” One can only surmise that the Trump campaign is trying to arrange some sort of protest for Trump’s most ardent followers.

See you in Washington, DC, on January 6th. Don’t miss it. Information to follow!

The NY Post editorial board has been among the most loyal newspaper outlets to President Trump. When Rudy Giuliani came into possession of a hard drive that allegedly belonged to Hunter Biden, he took it to the NY Post after other outlets refused to run it without verifying the story first. Media insiders suggest the Post is the media outlet that remains closest to owner Rupert Murdoch’s influence, especially after the return of former Editor in Chief Col Allan to the New York tabloid.

The NY Post has something of a different reputation than other newspapers with such a large circulation and is better known for its celebrity gossip coverage under Page Six. But in the weeks that followed the Hunter Biden scandal, an oft-heard refrain on cable news was pro-Trump Republican officials lauding the paper for being the oldest current title, founded by Alexander Hamilton with the fourth-highest circulation in the country. All of those descriptors are true, but that does not mean that their reporting is always reputable.