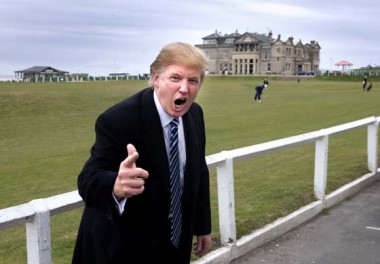 The New York Times is reporting that — according to documents obtained by Scottish government agencies — Donald Trump entered a partnership with a struggling local airport near his recently purchased golf resort to increase air traffic and boost tourism in the region in 2014.

The Trump administration has come under recent scrutiny for allegations of an unethically cozy relationship between U.S. Military and the Trump-owned property.

On Sunday evening ’s Bryan Bender and Natasha Bertrand reported in Politico that the U.S. Air Force has ordered a sweeping review to look at military accommodations following reports of aircrews making stops at Trump Turnberry in Scotland. The review will cover active-duty, Air National Guard and Air Force Reserve and concerns how the Air Force chooses accommodations during long flights.

Trump pushed back on this report via a Monday morning tweet:

I know nothing about an Air Force plane landing at an airport (which I do not own and have nothing to do with) near Turnberry Resort (which I do own) in Scotland, and filling up with fuel, with the crew staying overnight at Turnberry (they have good taste!). NOTHING TO DO WITH ME

The New York Times reported that as Mr. Trump began his eventually successful bid for the White House, the “Pentagon decided to ramp up its use of that same airport to refuel Air Force flights and gave the local airport authority the job of helping to find accommodations for flight crews who had to remain overnight.” The intersection of these two agreements is presented as evidence of “how Mr. Trump’s continued ownership of his business produces regular ethical questions.”

But documents obtained from Scottish government agencies show that the Trump Organization, and Mr. Trump himself, played a direct role in setting up an arrangement between the Turnberry resort and officials at Glasgow Prestwick Airport.

The government records, released through Scottish Freedom of Information law, show that the Trump organization, starting in 2014, entered a partnership with the airport to try to increase private and commercial air traffic to the region.

As part of that arrangement, the Trump Organization worked to get Trump Turnberry added to a list of hotels that the airport would routinely send aircrews to, even though the Turnberry resort is 20 miles from the airport, farther away than many other hotels, and has higher advertised prices.

Trump Organization executives held a series of meetings with the airport officials to negotiate terms that would lead to more referrals, the documents show.

The Air Force said the decision to stay at the Trump resort would have been the result of “a multitude of factors,” including the lack of suitable lodging like a nearby military base, but it didn’t provide evidence that nearby hotels were more expensive or unavailable at the time of the stays at the Trump resort.