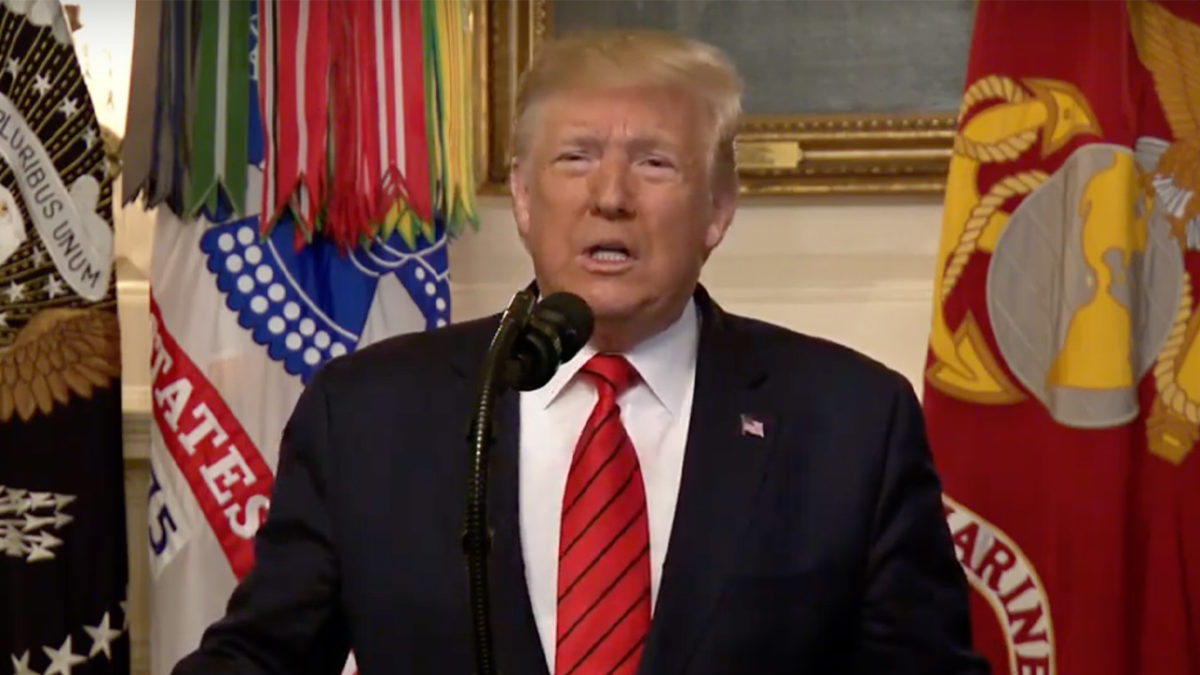 President Donald Trump has been accused of hypocrisy for dismissing the Ukraine scandal whistleblower agreement to answer written questions from Congressional Republicans.

Trump kicked off the workweek by getting on the Twitter machine and launching a bunch of new barbs at the “disgraceful” impeachment inquiry of his dealings with Ukraine.

What I said on the phone call with the Ukrainian President is “perfectly” stated. There is no reason to call witnesses to analyze my words and meaning. This is just another Democrat Hoax that I have had to live with from the day I got elected (and before!). Disgraceful!

At one point, Trump resumed his attacks on the whistleblower while saying it would be “not acceptable” if they are only pressed by written questions.

The Whistleblower gave false information & dealt with corrupt politician Schiff. He must be brought forward to testify. Written answers not acceptable! Where is the 2nd Whistleblower? He disappeared after I released the transcript. Does he even exist? Where is the informant? Con!

Trump was reacting to the news that Mark Zaid, the legal representative for the whistleblower, has offered a deal where his client will answer questions from House Republicans under oath if they submit written inquiries to his team. It is currently unclear if the GOPers on the Intelligence Committee will take the deal or not.

While Trump is calling this arrangement insufficient, it may be worth remembering that the president declined to speak directly to Robert Mueller during his investigations on Russia and obstruction of justice. Instead, Trump only submitted written answers to Mueller’s questions, which the special counsel “generally” deemed “inadequate and incomplete” during his testimony before Congress.

Critics recall this detail, so they find it interesting that Trump is demanding the whistleblower be held to a standard he refused to abide by:

The president who refused to meet with Mueller — whose written answers were described by the special counsel as not honest — says WB shouldn’t be able to answer in writing. https://t.co/sxpHo365OB

➡️ What a raging hypocrite!!

Trump was perfectly fine answering, in writing, questions from Mueller. Now, it’s a crime to do so. Unreal. https://t.co/aUSoqM4zjC pic.twitter.com/eL6lIQD2c7

Trump, of course, provided written answers to Mueller because his attorneys thought he’d perjure himself in an interview. Now: “not acceptable!” https://t.co/C0QQd9mhat

Of course Trump submitted written answers to Mueller but give up looking for consistency in his defense. This is and always has been a flood-the-zone strategy. See also the “no quid pro quo but even if there was…” argument https://t.co/pV9qTxfwwF

I am not even going to bother with the obvious hypocrisy here on written answers ….. https://t.co/nsZ7MKJriM

“Written answers not acceptable!” Is something I wish Robert Mueller had said. https://t.co/b5aktwvN7F

Why were written answers good enough when Mueller was asking you questions but now are not good enough for the whistleblower? https://t.co/M7n8gypLLy