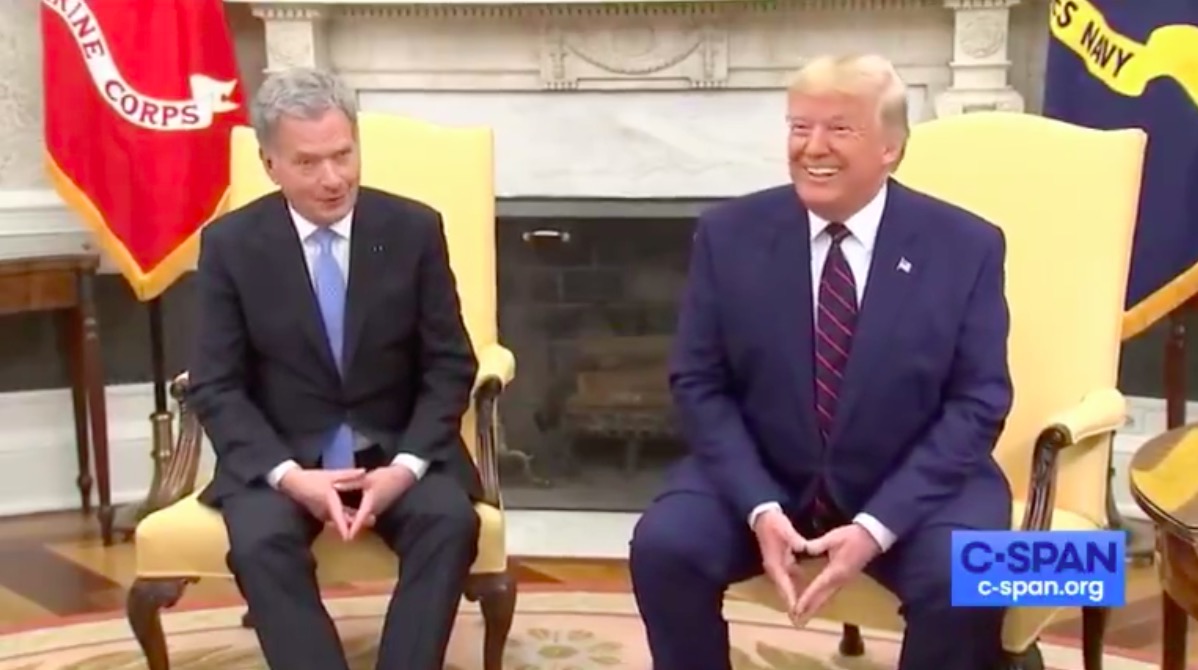 During Donald Trump’s first talks with the press since a report on his proposal to build an alligator and snake-filled moat on the U.S.-Mexico border, the president went on several tirades lashing out against the media, Democrats, and his own intelligence community in one of his crazier Oval Office rants.

The president’s candid comments in the White House on Wednesday included accusing House Speaker Nancy Pelosi (D-CA) of running a needle-infested “tent city” in her San Francisco district, denying “stupid” reports on him calling for border moats and shooting migrants in the legs to slow them down, and repeatedly suggesting that Rep. Adam Schiff (D-CA) can’t carry Secretary of State Mike Pompeo’s “blank-strap” — a self-censored reference to the term “jock-strap.”

Trump, who made the comments while seated next to the president of Finland, also doubled down on his calls for Schiff to be removed from office and tried for treason for “making up the words of the president of the United States.”

Journalists and media figures responded to Trump’s unhinged broadsides against political enemies with mockery, while also questioning his mental fitness after the bonkers rant.

Check out a few of the media reactions below:

I never thought I’d see a POTUS deny he suggested a border most with alligators snakes and flesh piercing spikes. A first

Words can’t really convey how unsettling this is to watch.

He’s ranting and doing a third-rate version of a Hannity monologue.

What’s on President Trump’s agenda? Vitriol, attacks and rants. @SpeakerPelosi is right. This is extremely sad. And also frightening.

like i argued over the weekend, the short-term tactical benefit of impeachment is it makes trump absolutely unhinged, which itself could build more support for impeachment

Interesting that Trump’s calculation is “BULLSHIT” won’t offend but he uses “blankstrap” instead of “jockstrap.”

The president of Finland as Trump rails against San Francisco, Los Angeles and the governor of California. pic.twitter.com/CpuVRjqfl6

Can’t see this in most of the TV feed, but Trump’s long-winded bonkers rant against Pelosi and Schiff moments ago happened while the Finland president was just sitting there waiting quietly

The president’s state of mind is alarming. This has basically always been true, but it’s getting markedly worse.