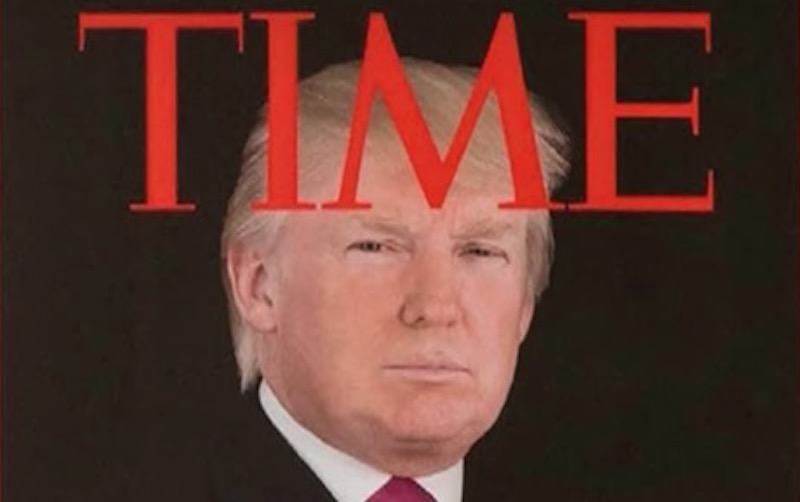 The jig is up. President Donald Trump was not named Time’s Person of the Year, despite whatever doctored magazine cover that hangs on the wall at Mar-a-Lago.

It’s ok, though. It’s perfectly fine. Trump didn’t even want to be on their stupid magazine cover anyways. He told them as much, according to his one hundred percent truthful never-at-all braggadocios Twitter account.

Time Magazine called to say that I was PROBABLY going to be named “Man (Person) of the Year,” like last year, but I would have to agree to an interview and a major photo shoot. I said probably is no good and took a pass. Thanks anyway!

Person of the Year honors went to “The Silence Breakers,” the endless cadre of women who have stepped forward to take powerful men to task for sexual harassment and assault.

The good news for our president’s fragile ego? Trump was mentioned in the magazine eight times. Huzzah!

The bad news for our president’s fragile ego? Most of these mentions were to remind readers of his alleged sexual misconduct. Whatever the opposite of huzzah is!

While Trump has yet to tweet angrily at this outrage of justice, using the social network earlier this morning merely to lob a random “MAKE AMERICA GREAT AGAIN” at his followers, the rest of Twitter has mocked him endlessly. Here are some of the most brutal tweets.

Donald Trump made it into Time’s Person of the Year issue after all: As one of the accused.

Not only is Trump not Person of the Year, he is mentioned in the piece as both a harasser and a motivation to speak out. https://t.co/Fs9fNfecD6

Trump isn’t Person of the Year, but TIME’s piece on The Silence Breakers calls Trump a ‘precipitating factor’ in the #metoo movement. “In this case, you had Harvey Weinstein, and before that you had Trump.” https://t.co/fYaJLcTgq6

President Trump’s name appears in the ‘Time Person of the Year’ issue 8 times, and all 8 times it refers to him as an abuser of women! This is why Time wanted a photoshoot with Trump. Congratulations, you did make the #PersonOfTheYear issue!

Congrats to the Silence Breakers!

Time Magazine’s 2017 #PersonOfTheYear are The Silence Breakers who spoke out against sexual harassment.

2017 runner-up was Trump: who is an accused sexual predator.

Now we know why Time wanted to do a photo shoot with Trump for its Person of the Year story https://t.co/YWFO05QE4P

Trump did make it into the Time Person of the Year issue, just not in the way he wanted to https://t.co/yieM7TJPan

Trump is “second place” in TIME’s Person of the Year, behind the women who say he sexually assaulted them

Surreal: President Trump is mentioned 7 times in the article, both as someone accused of sexual harassment and whose election motivated women to speak out. He is also the 2017 Person of the Year runner up. pic.twitter.com/s5uWZe9iKS

Analysis: Time’s Person of the Year isn’t Trump. It’s basically the opposite of Trump. https://t.co/nZMbueIhUQ

It must be noted, however, that not all is broken mirrors and acid rain for President Trump. He was named as runner-up. You’ll get em next year, sir!