The Weather Channel is currently in a dispute with DirecTV over a distribution agreement, and the channel may end up getting dropped from DirecTV, so the channel is launching an all-out PR blitz against DirecTV to push for a settlement before they hit the deadline next week. One executive of the Weather Channel’s parent company said DirecTV would be “deeply irresponsible” if they took the channel off their lineup because of all the people who turn to them for updates during severe storms.

The Weather Channel has even set up the website KeepTheWeatherChannel.com, with a big headline splash reading “Don’t Let DirecTV control the weather.” The site emphasizes how serious it would be if millions of people were to suddenly lose The Weather Channel, by emphasizing its value as a “critical life-saving community resource.”

Here’s how the main page of the site looks now: 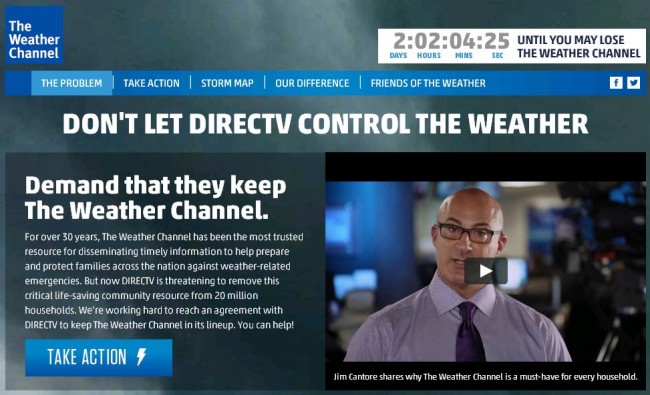 The president of the channel even went so far as to say this is a “public safety issue,” leading to this exchange at the TCA.

One critic noted TWC is a successful company owned by a big corporation, asking “Is it fair to declare it a public utility?” in what’s really a business dispute.

“Absolutely. And I’m not kidding,” Weather Channel president David Clark responded ominously. “If you’ve ever been in a severe weather situation and you need to make a decision to protect your family and you need to make it fast” you need “to know your information comes from a trusted source… We have a mission to serve that we take seriously.”

DirecTV responded today by saying much of The Weather Channel’s content is not breaking news but “reality television shows” and they carry another weather channel anyway.

[photo via The Weather Channel]